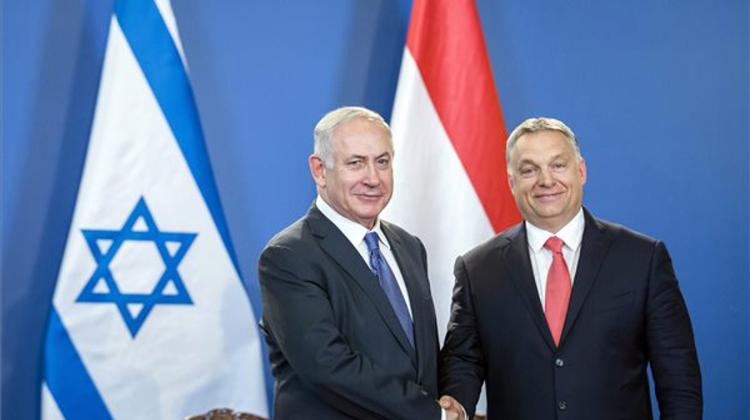 Hungary’s leftist opposition parties criticised Israel’s prime minister for failing to condemn the Hungarian government’s campaign “inciting anti-Semitic sentiment” after his talks with Hungarian Prime Minister Viktor Orbán, while Jobbik party demanded to know what the two leaders had agreed on “behind the scenes”.

The opposition Socialists said preserving Hungary and Israel’s friendly relations in the long term was a national interest, but criticised Benjamin Netanyahu for “inserting himself” in Hungary’s domestic politics and the government’s campaign.

He expressed regret that “this is all happening at a time when an evil and foolish government campaign is inciting anti-Semitic sentiment” and that Netanyahu’s remarks made at Tuesday’s press conference with Orbán had “only added to” the Hungarian Jewish community’s feelings of uncertainty.

The Democratic Coalition (DK) said Netanyahu’s visit was part of a “culpable political gamble”. Although the Israeli and Hungarian prime ministers have differing world views, they are both interested in implementing “authoritarian policies aimed at dismantling democracy”, DK board member Attila Ara-Kovács told a press conference. Ara-Kovács said it would have been “vital” for Netanyahu to condemn Hungary’s “domestic politics of anti-Semitic incitement”, adding that “this cannot be ignored in exchange for votes”.

He said Netanyahu’s visit was about the Israeli PM “joining a club whose members include [Russian President Vladimir] Putin, [Turkish President Recep Tayyip] Erdogan and Orbán” rather than about advancing bilateral economic and cultural ties.

Ruling Fidesz dismissed the Socialists’ and DK’s comments as “sour grapes” over the fact that no Israeli prime minister had visited Hungary during the premiership of DK leader and former Socialist prime minister Ferenc Gyurcsány or at any other time when the Socialists were in power.

Green LMP said both Orbán and Netanyahu were “becoming increasingly isolated” on the international stage, adding that they were looking to overcome their isolation by preserving their ties with each other.

Netanyahu’s visit “in and of itself is not a problem”, LMP board member Péter Ungár told a press conference. The problem is Hungary’s foreign policy, namely that leaders of Hungary’s allies are not visiting Budapest, he argued.

The Dialogue party called on the government to “end its double talk” in connection with its zero tolerance for anti-Semitism.

Referring to Orbán’s remarks that Hungary had committed a crime in the second world war by failing to protect its Jewish citizens from the Holocaust, Dialogue board member András Béres said it was “high time to utter these important words”, but questioned the prime minister’s credibility on this issue, noting his recent praise of post-WW1 regent of Hungary Miklós Horthy.

Béres called on Orbán to back up his words with actions and the government to disavow Horthy and his legacy.