Soros Billboards To Be Removed For FINA Championships 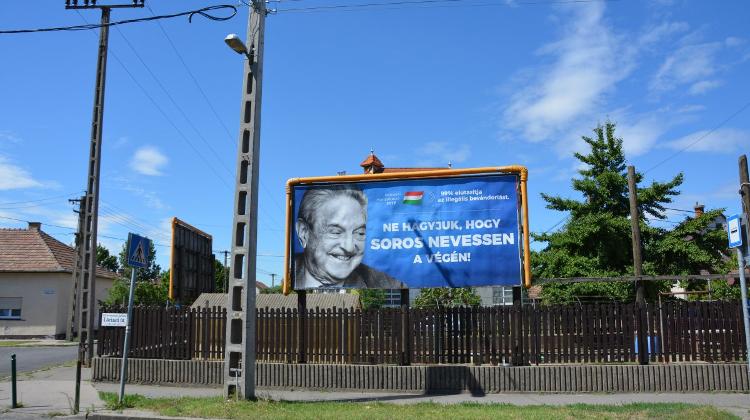 The government has announced it will begin removing posters and billboards featuring Hungarian-born financier George Soros from Saturday, ahead of the FINA World Aquatics Championships and a visit by Israeli Prime Minister Benjamin Netanyahu, and complying with a newly passed law on billboard advertising, atv.hu reports.

According to an “influential Fidesz politician” who spoke to atv.hu, Prime Minister Viktor Orbán decided it would be better if spectators and participants at the 2017 FINA World Aquatics Championships, opening this Friday and running until July 30, are not confronted with the almost omnipresent posters and billboards.

The website added that government sources officially confirmed on Wednesday that the posters would be removed.

The source told atv.hu that, to their knowledge, Orbán regards the anti-Soros billboard campaign as a “total victory,” not only because the governmentʼs ideological opponents - the opposition liberal and left-wing forces, as well as the far-right Jobbik - had painted themselves as “supporters of Soros who wishes to unleash migrants on Hungary,” but also because Israeli Prime Minister Benjamin Netanyahu reportedly declared that the poster campaign was not anti-Semitic, as Soros himself has suggested.

Atv. hu notes that Netanyahu arrives in Budapest on July 18 for talks with Orbán and other leaders of the Visegrád Group (V4) of countries, the first time an Israeli leader has visited Hungary for some 30 years. The report observes that the presence of billboards that offend the sensibilities of Hungaryʼs Jewish community may well also have been a factor in the decision to remove them.

The opening ceremony of the World Aquatics Championships takes place Friday evening, the day before a likewise politically controversial new law affecting political advertising takes effect. Many see the new law as a pretext for the removal of political billboards critical of the government, particularly those produced by Jobbik. The law prohibits political campaign advertising on billboards outside of election campaign season.

“The National Consultation ended at the end of May. The government planned the post-campaign in two stages and for six weeks. Accordingly, the second stage will end on July 15 according to original plans,” read an official announcement from the Government Information Center.

Nevertheless, The New York Times reported that opposition activists said they would go on with a plan to remove some of the billboards themselves.

“If itʼs true that the government is removing the ads because of the international attention tied to the world swimming championships, the doublespeak of Fidesz has been revealed,” the U.S. paper quoted a source from opposition party Együtt (Together) as saying. It noted that about 20 Együtt members and supporters took down several of the large billboards in Budapest on late Wednesday afternoon.

“Itʼs a great feeling to finally do this in the light of day,” György Kóber, a member of the partyʼs political council, was quoted as saying. “I am proud to be able to do something against the government.”

A statement from lawmakers of Fidesz said Együtt and other opposition parties were “defending their master,” Soros, with their criticism of the billboards, The New York Times reported.

Meanwhile, according to a report by Hungarian news portal 24.hu, Együtt believes the government may have acted unlawfully in using a photograph of Soros on the posters without his permission.

According to 24.hu, Lounge Design, the company commissioned by the government to prepare the posters, bought the photo from the archives of state news agency MTI for HUF 60,000, but in using it for political purposes appears to have violated the public mediaʼs General Contractual Terms. Együtt is demanding the presentation of authorization from Soros that his image could be used in what it described as “hate posters.”

The party said it had attempted on several occasions in recent years to purchase photos of government politicians from the public media, but that the contractual terms had routinely specified that the photos could only be used for advertising or political campaign purposes with the express permission of those portrayed in them.