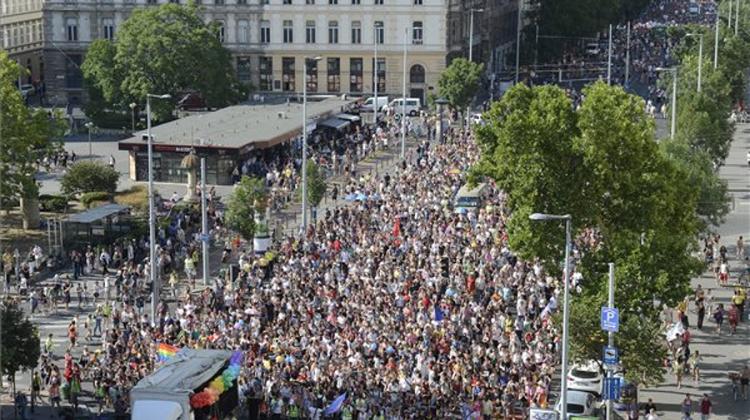 The Budapest Pride march marking the end of Hungary’s week-long festival of the gay (LGBTQ) community was held on Saturday afternoon, with participants gathering near Parliament and later moving across central Budapest without any significant incidents reported.

Theatre director Árpád Schilling told participants in front of Parliament that the LGBTQ community wants to achieve equality, but to do so, its members would have to accept and declare their self-identity “against our own political leaders”. However, he said this would not be easy, as “the vast majority” of Hungary’s MPs are “homophobic”.

Ágnes Gyémánt, founder of Hungary’s LGBTQ rights group PFLAG, said parents of LGBTQ people also have to “come out” to help members of the community by setting an example and sharing their experiences. She said solidarity towards the LGBTQ community in Hungary could be strengthened by including the topic of gay rights in public education.

Earlier on Saturday, organisers said they would change their route of the march in order to avoid any security fences put up by police. Dániel Hollander, a Pride march organiser, said authorities had approved the altered route.

Representatives of several opposition parties also joined in the march. Thirty-six embassies in Budapest expressed support for the event, as did the opposition Socialist Party, LMP, the Democratic Coalition, the Dialogue party and the Hungarian Liberal Party. Meanwhile, radical nationalist Jobbik has said that if it comes into power in 2018, it would not allow “openly anti-family demonstrations” to be held in Hungary.

MTI’s correspondent spotted some counter-demonstrators along the route of the march with signs that read “Shame”, “Jesus says to convert because the wages of sin is death” and “Marriage in Hungary is an alliance between a man and a woman, accept it!”

A Budapest Pride spokesperson said that because of the limited amount of fences this year’s Pride was significantly “freer” than in years past. The march ended just before 6pm at Várkert Bazár, at the foot of the Buda Castle.