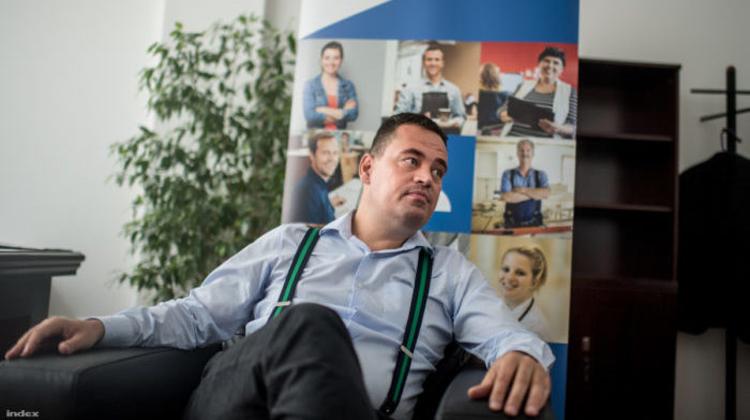 It had been already rumoured for a while that a new moderate right-wing party was about to emerge, but now it is official that Polgári Világ, co-founded by former Tanítanék (I would teach) movement activist István Pukli, is the latest among the scores of Hungarian micro-parties that wish to oust the governing Fidesz-KDNP (Christian Democratic People’s Party) alliance in next spring’s general election.

The party whose formation Pukli announced in March was officially registered on August 4. Although Pukli is already generally known thanks to his public appearances during the Tanítanék protests of last year, the party will not be chaired by him but by lawyer Zoltán Keresztény (pictured).

“We are a centrist, centre-right party that awaits civil conservative and civil liberal Hungarians,” Keresztény told Index at the party’s headquarters. Keresztény a former Fidesz voter himself, said that according to him, in 2018 “mostly disillusioned Fidesz voters will choose the [Polgári Világ] party”, but former Hungarian Democratic Forum (MDF) and Alliance of Free Democrats (SZDSZ) voters might also find the party appealing.

Keresztény said Polgári Világ is supported by many well known right-wing professionals, including former Fidesz members, but for the time being he did not want to name any of the supporters.

As the party seeks to win over disillusioned Fidesz voters, any cooperation with left-wing parties is “unthinkable”, according to Keresztény. “The party’s goal is not cooperation but to prevent Fidesz from gaining a majority in the Parliament in 2018,” he summarized his party’s cooperation strategy.

Polgári Világ’s first political action will be to initiate a national referendum on introducing the euro in Hungary. The party handed in its referendum question to the National Election Office for verification on Monday:

“Do you agree that, in favor of Hungary’s joining the Eurozone, the National Assembly must oblige the government through legislative measures to officially request Hungary’s acceptance into the European Exchange Rate Mechanism (ERM II) system?”

Even though the question of introducing the euro is an economic one, Polgári Világ uses the oversimplified rhetoric of “Europe vs. Russia” well-known in Hungarian politics lately. According to Keresztény introducing the euro “is more than a change of currencies”, and that with the adoption of the common European currency “we enter a European rule system that would secure economic growth and democracy in Hungary and independence from Putin’s Russia”.

Before the global financial crisis the beneficial effects of introducing the euro in Eastern European countries with smaller and slower economies than their core country counterparts was the subject of public consent.

However, since the protracted crisis of the Greek economy, even experts of the International Monetary Fund (IMF), the World Bank and the European Commission cannot agree on euro politics for small economies such as the Hungarian.

However, Keresztény speculates that if the Christian Democratic Union/Christian Social Union (CDU/CSU) coalition wins the federal elections in Germany and Angela Merkel is re-elected for a fourth term as Chancellor, she will loosen the stiffness of the eurozone dictated by Germany in order to support Emmanuel Macron’s economic stimulus program. And this, Keresztény argues, would be beneficial for Hungary as well.

Nevertheless, Polgári Világ estimates that, should the National Election Office validate their question, they would be able to gather the 200,000 signatures necessary for a national referendum by the beginning of next year, even though it is highly unlikely that the national referendum would be held before the general election.

The financiers of a possible signature-collecting campaign and the party itself remain in the dark. Keresztény told Index that the party is “supported by the work and private income of those entrepreneurs who work for or around the party”, but stressed that “there is no oligarch behind us”.

Although currently there is no political party on the Hungarian scene with a clear moderate right-wing program, given Hungary’s majority electoral system and the unwillingness of numerous opposition parties – including Polgári Világ – to cooperate, the appearance of every new contender for next year’s general election lessens the chances of Fidesz’s removal from power.