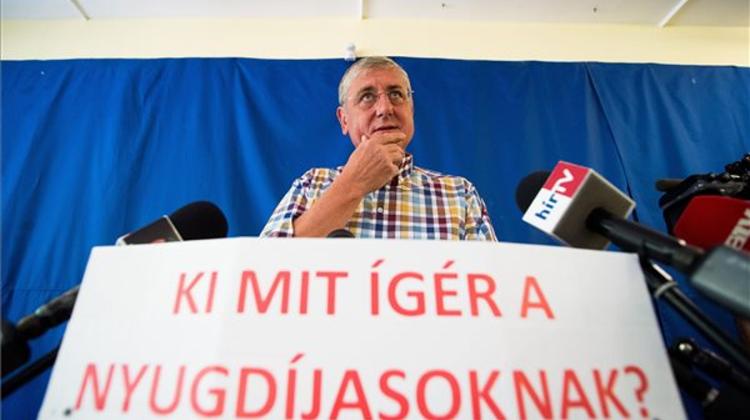 Hungary’s larger opposition parties agreed at a forum on Thursday on the need to reform Hungary’s pension system. Hungary currently operates a mandatory, defined-benefit pay-as-you-go pension system with a retirement age set at 63. A public minimum pension, set at a monthly 28,500 forints (EUR 93), is combined with an earnings-related pension. In late 2010, the government suspended the mandatory private pension scheme and all contributions were redirected to the public pension scheme.

Speaking at a forum of opposition leaders organised by the National Association of Pensioners, Socialist leader Gyula Molnár called for the minimum pension to be more than doubled. Retirement benefits worth less than 100,000 forints (EUR 327) should be raised proportionally more than average hikes to other benefits, he added.

He said that the government tended to support richer pensioners. A more secure and sustainable system is needed and pensioner rights should be enshrined in the constitution, he added. The 13th month pension, or a similar kind of payment, should be restored, Molnár said. From the age of 62 onwards, retirement should be made more flexible and the system for disability pensions reviewed, he said.

Gábor Vona, the leader of the patriotic Jobbik party, called for pension payments to be raised and their distribution made fairer. Further, the medicine subsidy system should be strengthened and VAT on goods generally bought by older people reduced, he said.

The issue of pensioners should be “freed from party politics” since changes should last beyond political cycles, Vona said. He called for the Council of Pensioners to be restored, and, rather than operating a social contribution tax, social contributions should be restored. The Jobbik leader said it would help efforts to recalibrate the system were more people to work for higher wages, since more contributions would flow into the system. Whereas on average 12 percent of GDP goes towards pensions in the EU as a whole, in Hungary this proportion is just 9 percent, he said.

Leftist Democratic Coalition (DK) leader Ferenc Gyurcsány said the pension system needed short-term corrections and long-term reforms, since the “great drama is expected in the long term”. Gyurcsány said that starting pensions would fall drastically around 2025-2030. With the replacement rate falling, contributions to the pay-as-you-go system would fall, he said. One term of government would suffice to establish a pension system comprising a basic pension of 50,000 forints (EUR 163) plus the earnings-related pension, he said.

“The small circle of people receiving disproportionately large pensions is more a moral than an economic issue”, he said. The 3,000 billion forints (EUR 9.8bn at current exchange rate) “missing after the state seized private pension funds” is a heavy loss, he said. Pensions, “which we consider a form of insurance”, can be raised either proportionately for all or the lowest pensions can be hiked to a greater degree to reduce the pension gap, Gyurcsany said.

“This is a dilemma worth tackling”, he said, adding that he personally would stand for the latter option. On the possibility of restoring the 13th month pension, Gyurcsány said such an allowance would siphon money away from education and health care. “I would be very cautious when considering it.”

Bernadett Szél, the co-leader of opposition LMP, said the two main principles guiding the pension reform should be fairness and flexibility. LMP proposes that carers of the elderly should qualify as employed and they should receive the minimum wage, she said. Further, pension benefits should rise in line with basket-of-goods price increases, she added. LMP also advocates awarding bigger pension increases to poorer retirees.

A flexible retirement age should be re-introduced, she said, adding that the current “utterly inhumane” policy for disabled pensioners should be scrapped. Further, wage disparities between men and women in Hungary should be addressed, she said, noting that women’s pension payments are 14 percent lower than men’s.