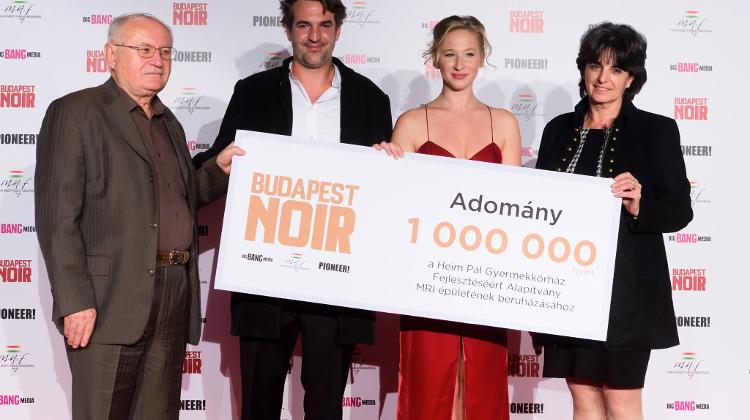 Last night a star-studded audience attended a charity gala screening of Budapest Noir, the new film by director Éva Gárdos and producer Ildikó Kemény, based on the bestselling Hungarian novel of the same name by Vilmos Kondor.

The film was shown on five separate screens at Cinema Pink inside the Mammut Shopping Mall in Buda, with one hall showing this Hungarian language production with English subtitles. As far as the film's content is concerened, you can't sum it up better than this quote from NoSpoilerReviewz,

"A love letter to a Pest that no longer exists, Elemér Ragályi’s stunning cinematography and Pater Sparrow’s detailed designs create a real, living piece of history.

Andras Szeker’s screenplay is taut, funny, serious, and violent with the requisite twists and turns necessary to pull off a whodunnit... as good as we’re going to get when it comes to an honest noir film".

The story is set in Budapest, in October 1936 just as Hungary was preparing to align itself with Hitler. The body of a young Jewish girl is found in a Terézváros doorway.

Zsigmond Gordon, a world-weary reporter for The Est newspaper, arrives on the scene and starts asking questions, but everywhere he turns seems to lead to a dead end.

Eventually he pulls together enough clues that lead him upwards to the top echelons of Hungarian society, boxing clubs, and high class brothels, to Budapest's dark underbelly of street fights, poverty, and pornography.

Refusing to give up our hero Gordon keeps asking questions, and the more others try to frighten him off the more determined he becomes to solve the case, whatever it takes, and whatever the cost to him and those involved.

According to the critics, "What could have easily fallen in to parody stays within the genre by giving us a great story, in a historical period that heightens the stakes, and with fantastic three-dimensional characters."

This is mainly down to the director holding on firmly to true noir ideals all the way through this engaging Hungarian made movie. The production quality is first-class, just as you would expect from Ildikó Kemény, who also produced the recemtly released Atomic Blonde starring Charlize Theron, James McAvoy, John Goodman, and the upcoming Red Sparrow starirng Jennifer Lawrence.

The critics note that Atti Pacsay’s music, while perhaps a little too old school, puts you in the right mood necessary to appreciate the plot twists and turns. It’s the acting that really makes this film connect so well with the audience.

Krisztián Kolovratnik plays the lead character Gordon Zsigmond, and he has a "Harrison Ford presence about him", making the serious bits meaningful, the funny bits work, and his ease with the ladies seems "appropriately effortless".

Reka Tenki is terrific as the 'love interest', and they’re both supported by a cast of fab character actors, including Kata Dobó, Zsolt Anger, and Attila Beko.

"As a result, the ending of the mystery comes as a satisfying surprise, and we feel as if we were in a world, not merely amused by that world," the critics rightly declare.

One thing we're left wondering about is a sequel, as Budapest Noir is the first novel in the series of five. It was followed by Bűnös Budapest (Budapest Sin), A budapesti kém (The Budapest Spy), Budapest romokban (Budapest in Ruins) and in 2012 the final installment titled Budapest novemberben (Budapest in November').

For now, the money raised will contributes to the construction of a new MRI building, which will enable the little patients at this leading local hospital for children to attend their check-ups within the hospital and not travel to other institutions.