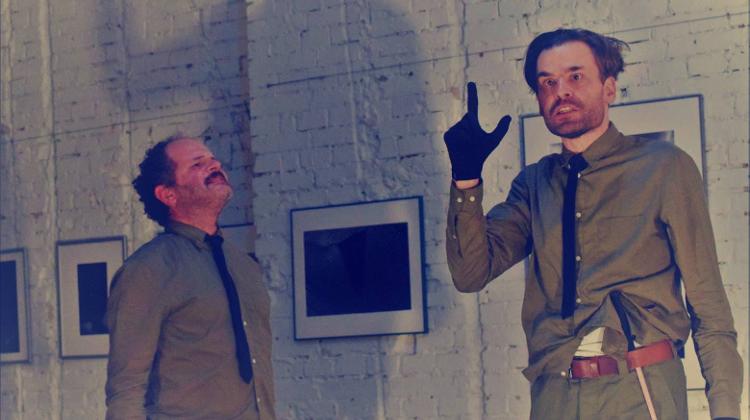 "Hitler and Hitler" is surrealistic farce, based on the play by the controversial Russian author Konstantin Kostenko, which won the Russian Drama Award Competition in 1995.

It is not classical biographical performance about Hitler, it is rather collage of artistic reflections on the book "Mein kampf" and Hitler's table talk, filled with rich imagination and vivid fantasy.

Berlin based actors, led by Christian Harting, known for his role in the Oscar wining "Son of Saul" together with the Macedonian director Oliver Micevski created "Hitler and Hitler" a performance which offers different perspective than the established one, and create new, yet painfully recognizable portrait of the paranoid dictator.

Hiler's image is universal and remains relevant in todays political context, which makes the performance sound like a political, aesthetical and moral challenge in the times of far left and far right populist, demagogic and authoritarian governments.

I had never heard of the play "Hitler and Hitler", apparently it won the 1995 Russian drama prize.
However, I was familiar with the work of its director Oliver Miceveski and had attended performances of the haunting and mind-blowing “Edmond” by David Mamet in Budapest and the wicked and quirky “Vernisage” by Vaclav Havel in Prague. Micevski typically challenges his audience stylistically and cerebrally, and I attended expecting surprises. I was not disappointed.

The back of house space provided by FUGA immediately set the tone; dim lighting, a windowless bunker.The play relates the last days of Hitler and predictably touches on difficult themes. Less predictable was the way this was achieved.

The lights go up and we are greeted by a smiling “brown shirted” character wearing socks and sandals. He shouts repeatedly “Willkommen in Deutschland” as he plays a jaunty riff on an electric guitar… It becomes clear that this is going to be unconventional and challenging theatre.

Through a series of cleverly deployed theatrical devices the performers create a tension that builds subtly around the failed visions of the anti-Semitic tyrant. Initially absurd and comic scenarios are played out – Hitler’s bizarre justifications of vegetarianism; an obsession with personal grooming; a loaf of bread big enough to feed the whole of Germany!

Musical accompaniment includes the traditional Haydn quartet in C major ("Deutschland Deutschland uber alles...") and a less conventional selection of excerpts from “Now that’s what I call Death Metal” and all this punctuated with lines of cocaine snorted from a wand waved in moonlight!

The imagery and atmosphere created in these bizarre schizophrenic monologues becomes increasingly threatening and unnerving, not least due to the cast’s ability to switch between momentary intimacy and sudden stark alienation. The actors Christian Harting, Sara Klimoska and Roderick Hill present a masterclass in audience manipulation pulling us in and out of the conflicted and confused mind of the Fuhrer we find ourselves at once complicit in and disgusted by the “visions” of the Fatherland.