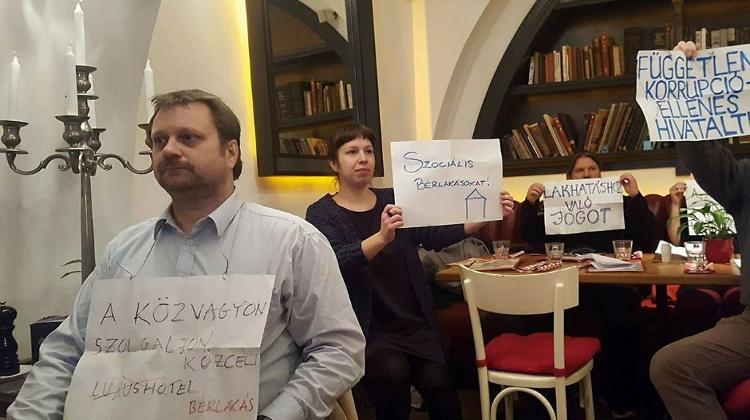 Some 30 activists occupied the Pest-Buda restaurant in Budapest’s exclusive Castle District for some nine hours on Sunday in protest of government corruption and publicly-owned real estate being rented to government-tied business people for well under market value, index.hu reports.

The activists, affiliated with both the Country For All Movement (Közös Ország Mozgalom), a group recently well-known for pushing for electoral reform, and The City is For All (A Város Mindenkié), a homeless advocacy and housing rights organization, argued that the district-owned building that contains the Pest-Buda Restaurant and Hotel is being rented out for far below its market value to the company’s owner and friend of the Orbán family Roy Zsidai, what the activists called “public property being used for private gains.”

According to a report from atv.hu, Zsidai’s company is renting the entire building for some HUF 126,000 (USD 475), far below market value compared to other properties in the expensive historic neighborhood.

“The system today in Hungary is that opportunities open for those who are close to the Orbán family, in fact opportunities open only for them. They can freely steal and damage public property, they are the ones who are enriched,” the activist group wrote in a statement.

Police were called by the restaurant staff but refused to remove the protesters as no crime had been committed. After the long occupation the Country For All activists continued to the Prosecutor General’s Office where they erected a homemade sign on the building which read, “The Prosecutor General responsible for the enrichment and impunity of Lőrinc Mészáros”, referring to one of Hungary’s most notorious oligarchs and personal friend of Prime Minister Viktor Orbán.