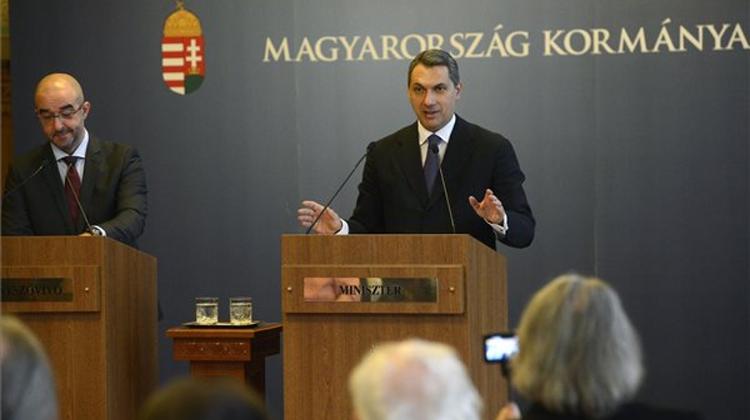 Attempts by factions in the European Parliament to shame and undermine Hungary are once again intensifying, government office chief János Lázár said at his weekly news briefing. A liberal EP group recently initiated a new hearing concerning Hungary, he noted, calling on all MEPs to show Hungarians respect and refrain from insulting them.

Lázár said it could be assumed that related efforts were gaining traction due to the outsized influence of US billionaire George Soros. Next week’s cabinet meeting will discuss this issue, including how these activities affect Hungary’s reputation, he said.

At the request of Prime Minister Viktor Orbán, an intelligence assessment has been completed concerning Soros’s activities in Berlin and Brussels and the extent to which Soros has succeeded in influencing opinion against Hungary, Lázár noted.

The report concludes that organisations linked to Soros have had a strong influence on what the European Commission had to say and do in connection with a dispute with Hungary concerning Norwegian funds, Lázár added. Soros organisations have the capacity to influence decision-making in the EC and “this means in practice that they can insert their statements into reports connected with Hungary”. Furthermore, former employees of Soros organisations can gain employment with these bodies, he said.

In response to a question regarding the possibility of the EU banning the “National Consultation” public survey on the so-called Soros plan, Lázár said he did not think they would succeed because this was an issue of national competence. However, he said he was surprised that politicians who claimed to be European liberals were protesting against a democratic institution. Left-wing and liberal MEPs continually “toy with” Hungary and Poland, and in Hungary’s case, the border fence has been their recurring topic. “We are ready for a debate once again,” he added.

In response to a question concerning whether Orbán would meet the EP President at next week’s summit in Gothenburg, he said the two officials maintained very good working relations and every issue could be discussed with the EP president at any time.

Lázár said a sum of 51 billion forints would be allocated to the ministries of the interior and defence by year-end “in order to ensure that Hungary remains one of the safest countries in Europe and it is protected from illegal migrants”. The government respects the decision of some large western European countries to become “immigrant countries” but it does not accept their efforts to force change on central European countries that are “not yet immigrant countries”.

Even if these countries keep stating that mandatory quotas and migrant distribution are only “ideas”, in reality steps have been made to implement them, and negotiations are under way to import migrants from outside the EU and relocate them, Lázár said, adding that this was an example of how the European Commission “sneakily” organised the settlement of migrants.

Meanwhile, Lázár noted that the EC has criticised Hungary for not respecting the deadline for responding in the latest phase of infringement procedures. The reason for that is that the EC has “openly applied double standards” and specified “unrealistic deadlines” concerning politically sensitive matters.

Hungary is asking for “equal treatment with everyone else”, he added. In response to a question related to the German Constitutional Court deciding to introduce a third gender in regulations concerning personal rights, he said this fitted the trend that certain communities giving up the model of a Christian and family-based Europe. I

nstead they are working to create a new Europe that stands above nations and leaves behind Christian values. “We want the kind of Europe that preserves its Christian roots,” Lázár said.

Addressing the issue of the rights of ethnic Hungarians in Ukraine’s Transcarpathia region, Lázár said their rights must not be curbed. Referring to disputes with Ukraine over its education law, Lázár said the government was “working to retain the opportunity for cooperation”. He noted that Ukraine was striving for European Union membership, and called on its government “to observe the custom that once a minority is granted a right, that right should be upheld”.

Lázár also criticised Democratic Coalition leader Ferenc Gyurcsány for recently suggesting that Hungarians living in other countries should be stripped of their voting rights in the mother country. He insisted that Gyurcsány “has had a problem with ethnic Hungarians since 2003-2004, while he would gladly see illegal migrants breaking through the country borders”