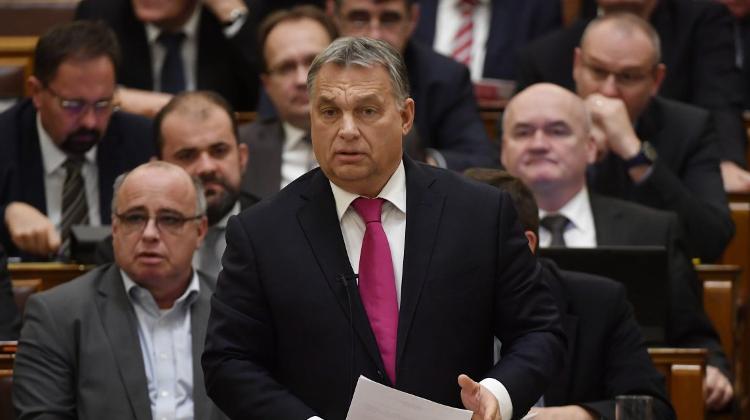 Deputies of the ruling Fidesz-Christian Democrat alliance submitted a draft decree to parliament to counter the European Parliament’s “decision to implement the Soros plan”.

The Cabinet Office of the Prime Minister will prepare measures by January’s government meeting with the aim to thwart the “Soros plan”, cabinet office chief Antal Rogán said on Monday during a hearing before parliament’s justice committee.

Christian Democrat MP István Hollik told a press conference that the decree would demonstrate “parliament’s rejection to accelerate the influx of immigrants and their relocation in groups”.

Hollik said that parliament’s adopting the decree would also be equal to the national assembly’s rejecting that “Brussels should transfer competencies to pro-migration Soros agencies”.

Hollik voiced hope that parliament would have a vote on the bill on Tuesday. In its decree, parliament would “call on the government not to succumb to the pressure from Brussels… and reject the Soros plan, and provide continuous information to all Hungarians concerning the status of the implementation of that plan”.

The deputy said that the EP’s recent, “revolting” decision would lay the foundation of a system of “permanent and mandatory re-distribution of migrants”, which he suggested would “irreversibly change the future and culture of Europe”.

Hollik reiterated the government’s position that “Hungary and the Hungarian people do not need the Soros plan, they do not want a mandatory relocation mechanism, nor do they want to see immigrants.”

The green opposition LMP said they would stay away from parliament’s debate on the proposed decree.

LMP’s prime minister-candidate Bernadett Szel said that such a debate would make the national assembly “ridiculous”, adding that she would use the time to talk to people outside parliament concerning wages, national health, education and corruption.

In response to opposition criticism, he presented notarial deeds which he said clearly and credibly demonstrated that 2,171,500 “National Consultation” survey questionnaires had been received by the postal service by December 5.

Together with online forms, nearly 2.3 million people expressed their opinions through the survey, he added. Already in the initial phase of processing the questionnaires it is clear that the majority of people reject the “Soros plan” on migration and the attempts to restrict Hungary’s sovereignty.

As a result, steps need to be prepared to thwart the plan in Hungary and in the European Union, Rogán said.