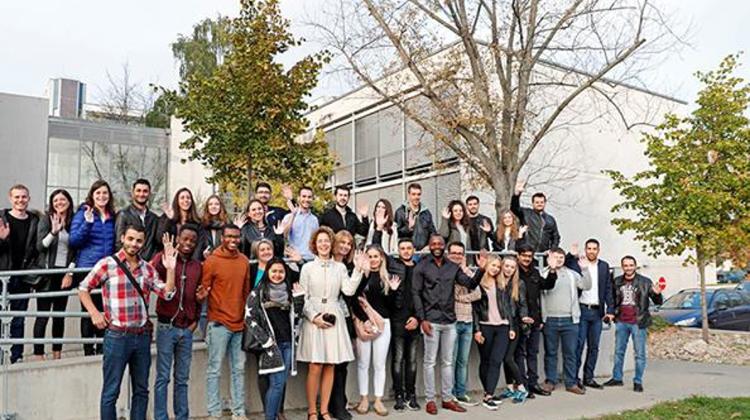 I must admit that I didn’t realize until now the scope of the Stipendium Hungaricum (SH) program, which was conceived by the Orbán government in 2013. It has been an ambitious project from the very beginning.

Péter Szijjártó, in those days still undersecretary in the prime minister’s office, announced that in the very first academic year of 2014/2015 Hungary was expecting 2,000 students from the Far East, the Arab countries, and the Western Balkans.

By that time the Hungarian government had signed about 25 bilateral agreements specifying the number of students from each country who would receive full scholarships to study in Hungary. At the end, only 1,266 students arrived, the largest contingent coming from China (187), followed by Jordan (179), Tunisia (85), and Vietnam (77).

Although the monthly stipend was meager (40,000 Ft/month), the total cost per student was pretty high. In 2013, the government was thinking in terms of 1.25 million forints per semester, which included tuition, health insurance, free dormitory space, and free textbooks.

The ministry of human resources calculated that the total cost of having 900 HS students attend Hungarian institutions of higher education for three years would be 4.5 billion forints.

Today almost 3,000 foreign students are enrolled, and the government is planning a rapid expansion of the program. Already in 2013 Szijjártó said that the Orbán government was negotiating with Latin American countries. He indicated that negotiations were proceeding with Russia as well.

By December 2015 arrangements had been made with 45 countries. At that time Viktor Orbán announced that Hungary would like to extend the program to 80 countries. In the same speech he stressed that Hungary, in initiating this program, wants to show the world that it is a welcoming country, although he quickly added that the existence of the HS program doesn’t change the government’s attitude toward “illegal immigrants.” László Palkovics outlined the plan: by 2016 they want to have 3,000 students and by 2017, 5,000.

This ambitious scholarship program has been a success, unlike the “eastern and southern openings” the Orbán government initiated at about the same time. It is a well-known fact that trade relations with eastern and African countries haven’t grown, despite the government’s best efforts. But by now there are 3,000 foreign scholarship students in Pécs, Debrecen, Szeged, Győr, Budapest, and Miskolc.

Universities are eager to accept these students because, first, they are fully funded by the ministry of human resources and, second, the number of Hungarian students in universities and colleges has decreased substantially. Demographic changes are partially responsible for these diminishing numbers, but I suspect that the government’s obvious unwillingness to have as high a number of Hungarian university students as were enrolled in 2010/11 is the real reason for the lower numbers.

The Orbán government decreased the number of tuition-free places, and the tuition fees have become astronomically high. Moreover, according to the latest statistics, more than 7,000 Hungarian students are enrolled in western universities.

A certain “internationalization” of Hungarian education seems to be the goal. Universities actively recruit foreign students over and above those who are enrolled with the help of the HS program. In 2012/13 20,694 foreign students were in Hungary. By 2016 that number had grown to 28,628, which is about 10% of all university students.

László Palkovics, undersecretary of education, wants to further increase the number of non-Hungarians in the system. By 2020 he would like to see this percentage rise to 15%.

Looking through the statistics that describe in some detail the growth in the number of students being educated at the expense of the Hungarian taxpayers, we see some notable trends. For instance, there has been a phenomenal growth in the number of students from Azerbaijan. While in the fall semester of 2015 only 39 Azeri students studied in Hungary, a year later their number was 202.

The statistics for Morocco are equally impressive. Their numbers grew from 14 to 66 in one year. By now, the number of Chinese students is almost 300, and Jordan is not too far behind with 245. I noticed with some amazement that 93 Ecuadorians want to study in Hungary.

Turkish-Hungarian relations are strong, as we know, and therefore it is not surprising that today 108 Turkish students are in Hungary as opposed to a year ago, when they numbered only 48.

Not everybody is happy about this large influx of students from so-called third world countries because they believe that the money spent on these foreigners should be spent on Hungarian students, whose numbers have decreased dramatically, from 302,000 in 2010 to 251,000 in 2017.

The cost of the program today is much higher than was anticipated in 2013. Among other things, universities had to hire extra faculty members whose sole job is looking after the students who need mentoring and general assistance in adjusting to their new surroundings.

The government claims that the opportunity for Hungarian students to attain a college or university education isn’t being curtailed by the HS students’ arrival in the system. This is true; the problem lies elsewhere. But the influx of HS students does put Hungarians at a disadvantage when it comes to dormitory accommodations since the foreign students are guaranteed either dormitory rooms or, if they prefer off-campus housing, a stipend of 40,000/month to cover the additional expense.

Given the extremely high rent for apartments, almost all HS students opt for dormitory rooms. But there are not enough dormitories in Hungary in the first place, and the number of HS students does put an extra strain on the system. According to the latest figures, 43% more students apply for dormitory rooms than there are places. In some Budapest universities 15-50% of available dormitory places are occupied by HS students.

The housing crunch is so severe at the Budapest University of Technology and Economics that, although the HS students are guaranteed dormitory space, they must live, believe it or not, in a Székesfehérvár dormitory 64 km and almost an hour in travel time away.

For most students the language of instruction is English (2,539). Only 378 study in Hungarian. But most of the students, at least at the István Széchenyi University in Győr, which received its first batch of 68 HS students from 25 different countries this year, take a course called “Magyar Nyelv and Kultúra.”

According to Magyar Nemzet, however, these students have little interaction with Hungarian students because they are housed separately, which is a sure way of isolating them from the majority culture. The Hungarian government looks upon these students as future leaders of their native countries who will spread the good name of Hungary, but isolating them in clusters defeats the purpose.

Even in the Rákosi regime, the government had the good sense to disperse Chinese students among Hungarians in dormitory rooms in order to improve their language skills and ease their adjustment to the Hungarian way of life. Considering the immense amount of money spent on the program, I really wonder how much Hungary will benefit as a result.