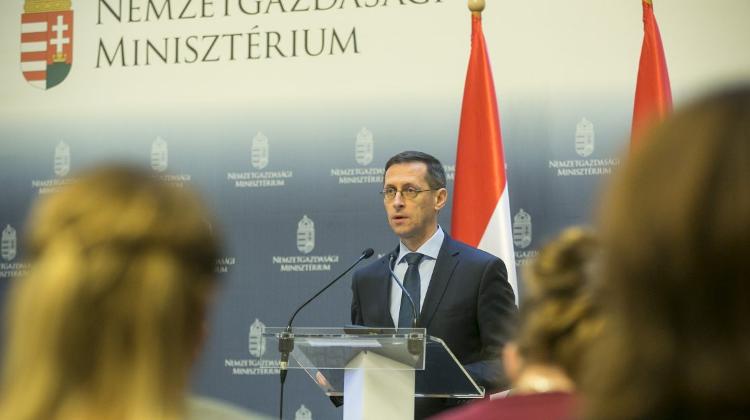 For the Hungarian economy, the year 2018 starts from a better position and with a better outlook than 2017 did, Minister Mihály Varga said at a press conference held at the Ministry for National Economy earlier today.

The Hungarian economy has been growing dynamically, in a balanced and sustainable manner, he stated. In light of data from the fourth quarter, a GDP growth rate of 4.1 percent appears to have been achieved in 2017.

This figure is well above the EU average, and that signals that Hungary’s economic convergence has continued, he added. Growth has been broadly based with almost every sector having contributed to expansion. In 2017, investment was a major growth factor, with a volume increase of more than 20 percent.

This has been mainly fuelled by the Government’s Family Housing Allowance (CSOK) programme: according to the latest data, financial institutions received more than 63 500 CSOK applications, totalling HUF 177bn, the Minister said.

Thanks to rising wages, consumption is also predicted to rise, and the Ministry is expecting further output growth in the construction and tourism sectors, he noted.

The latest data also show that more than 4.4 million people have a job now in Hungary, and this constitutes substantial improvement compared to 2010.

Hungary’s outlook is seen as positive at two out of the three major credit rating agencies, and although ratings are usually not changed before an election, during the course of the year an upgrade may still be expected, the Minister stressed.

Financial policy is to remain unchanged in 2018: the Government has been committed to a prudent fiscal policy and stable public finance management.

The deficit of the general government budget was about 2 percent last year, better than prior estimates. For this year, the Ministry is expecting a similarly low figure; the fact that it is an election year will not affect fiscal stability.

The government debt-to-GDP ratio is set to remain on a descending path: preliminary data indicate that including Eximbank outlays this indicator is to decline from 76 percent in 2016 to 74.5 percent by the end of 2017.

The Government continues to reduce taxes: the rate of corporate income tax was cut to 9 percent as of 1 January 2017, the lowest figure within the EU.

This reduction is to leave HUF 200bn at enterprises, Mihály Varga pointed out.

The 1 percent reduction of the rate of small enterprise tax (KIVA) to 13 percent is yet another favourable change for SMEs. Those who pay KATA, have an enterprise and are full-time students pay only HUF 25 thousand per month as of 2018.

Companies which invest in a project resulting in product-diversification or a new, innovative production method are entitled to deduct a tax credit from their corporate income tax base.

Hungary faces several legal changes as of Jan. 1, 2018, including an increase in general child-care benefits as well as child-care benefits for university students or graduates, added support for mortgage holders and the option of relief on student loan repayments.