Opinion: The European Parliament Rapporteur On Hungary Pays A Visit To Budapest 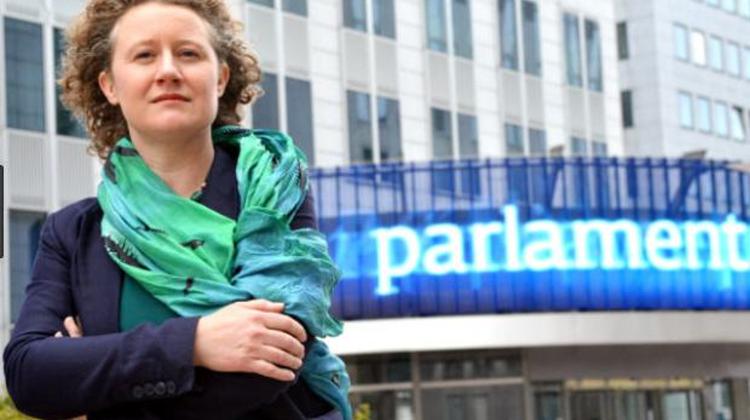 The Hungarian right-wing press is buzzing with indignation. Judith Sargentini, a Greens/EFA member of the European Parliament from the Netherlands, arrived in Hungary yesterday as part of her work as rapporteur for the parliament’s investigation into whether Hungary is in breach of the values of the European Union.

Her report will recommend what steps should be taken against Hungary for curbing freedom of the press, failing to uphold the rights of refugees and minorities, and taking steps against universities and NGOs.

After her appointment on July 11, 2017, Sargentini expressed her strong disapproval of the current Hungarian government. She believes that “time and time again, Orbán has gone against the norms and values of the European Union.

When a country is no longer prepared to uphold our common values, it’s a logical step to take away its voting rights.” Indeed, at the end of the road, if Parliament approves her report, it may recommend that the European Commission invoke Article 7 of the EU Treaty, which can deprive the country in question of its voting rights.

After Judith Sargentini met Levente Magyar, political undersecretary and deputy minister of foreign affairs, MTI published a short statement in which Magyar, instead of addressing the issues of Hungary’s disregard of “the norms and values of the European Union,” dwelt on the “sharp conflict between certain Brussels institutions and politicians and Hungary with regard to immigration.

The Hungarian people want to decide for themselves who they live with and have stated this on several occasions. This is what irritates certain Brussels politicians.” He added that the talks with the rapporteur were amicable but that the MEP had no knowledge of certain basic facts, in view of which her Hungarian negotiating partners offered Ms. Sargentini their assistance.

What else is new? The Orbán government’s answer to criticism from the European Union is invariably a two-pronged charge of ignorance and bias.

Magyar failed to inform the public about the specifics of Sargentini’s incompetence.

The right-wing media was on high alert and ready to discredit Sargentini ahead of her arrival. Pesti Srácok and several other news outlets portrayed her as “Soros’s man” who has been associated with Soros-financed NGOs for ten years.

Recently, she had several meetings with the Hungarian Helsinki Committee and TASZ, the Hungarian equivalent of the American Civil Liberties Union. She is “one of the trusted allies of George Soros.

” Fidesz also released a statement upon Sargentini’s arrival in Hungary, according to which “the real goal [of Sargentini’s report] is to force Hungary to carry out the Soros Plan.” Ahead of Sargentini’s arrival, Péter Szijjártó gave an interview to Kossuth Rádió’s morning program, 180 Minutes, in which he described LIBE, the committee which entrusted Sargentini to be the rapporteur on Hungary, as “nothing more than a theater” where the condemnatory report has already been written.

While Sargentini was in Budapest, in Brussels there was a book launch for a new work by NGOs from Hungary, Croatia, Poland, and Serbia on the “sick democracies” of Europe.

At the gathering several MEPs spoke critically of the Orbán government’s hate campaigns and its disregard of the basic values of the European Union. Sophie in ‘t Veld, a Dutch Liberal member of parliament, brought up Orbán’s claim from an interview in Das Bild a few days ago that the Syrian refugees are part of a Muslim invasion of Europe.

She suggested that the Hungarian prime minister refresh his memory on the basic values of the European Union, which he will find in Article II of the EU Constitution.

The reference to Article II was especially apt since in Budapest one of the “legal experts” of the Center for Basic Laws (Alapjogokért Központ), a government subsidized organization, announced today that it is unlikely that Judith Sargentini will get anywhere with her report on the absence of the rule of law in Hungary since there is no definition of the concept anywhere in the Union’s constitution.

So, he continued, any assertion of a lack of constitutional order is arbitrary. In this particular case, the LIBE investigation is a purely political exercise.

According to one of the many spokesmen of Fidesz, the conversation between Magyar and Sargentini is just part of the “compulsory rounds,” which in no way will influence the message of the report. It is one of those things diplomats in the ministry have to do now and again.

A couple of journalists from the state television’s M1 channel and from Pesti Srácok were on hand after Sargentini left the building of the Foreign Ministry, trying to have an interview with her. I don’t know what she thought of Hungarian journalists after this encounter, but I fear it couldn’t have been complimentary.

M1’s reporter didn’t seem to understand that the MEP was in Budapest to ask questions and learn about the country and its government. She was not ready to give interviews. The fellow from Pesti Srácok entertained Sargentini with questions like “If it depended on you, what kind of a future would you wish for Hungary?” And when he got no answer, he wanted to know what she thought of Viktor Orbán as a person.

The video of the encounter can be seen here. Pesti Srácok’s headline for the article describing the scene was “Soros’s man came to call Budapest to account and she left post-haste.”

The Hungarian government is not backing down in the face of more intense EU scrutiny. It looks as if the decision was already made to launch a new “action plan” to thwart the execution of the Soros Plan.

István Hollik (KDNP), who has become the fiercest and most extreme spokesman for the government, called Sargentini “one of the most important allies of George Soros.” The report she is working on is actually a “Soros Report.” While the Soros NGOs speak of “sick democracies,” what is really sick is the European Union’s attacks on Hungary.

So, the mood is belligerent and unyielding, though this may change as a consequence of the new Polish prime minister’s housecleaning that resulted in the departure of eight ministers from the far right and their replacement by centrists.

The move is most likely in preparation for a reset of Polish-EU relations. In that case, Viktor Orbán would remain virtually alone with his “action plan,” something I don’t believe he would relish.