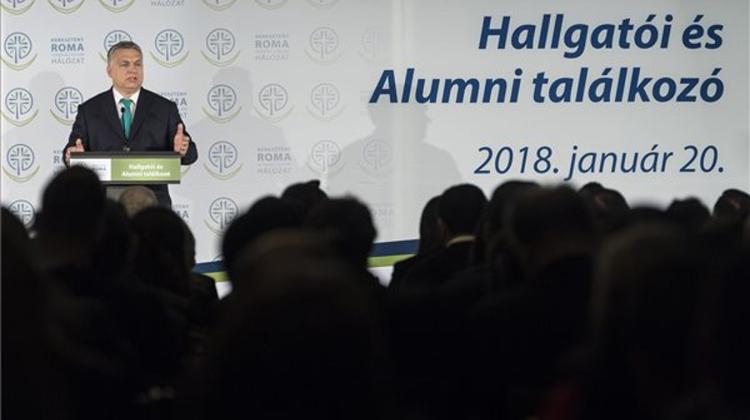 The government views Hungary’s Roma community as an asset, rather than a liability, Prime Minister Viktor Orbán said at a meeting of students and alumni of the Christian Roma Professional College Network on Saturday. “In our view, the Roma are not a helpless minority living off of benefits, that is, the money of other taxpayers.

They are Hungarian citizens for whom we can provide a livable future and opportunity right here in their homeland,” Orbán told the event held at the Hungarian Academy of Sciences. The common belief in Hungary had long been that the social inclusion of the Roma community was a lost cause, the prime minister said. But this event is about demonstrating that this is not that case, “that there is in fact hope, one just has to work for it”, he added.

The government believes that those who seek an opportunity should get it, because the world will only be fair if everybody gets a chance, Orbán said. The prime minister said that the only two paths for social mobility in Hungary were work and education.

And if the two connect, then that is a bonus, he added. Hungary’s economic progress of the last several years has meant that anyone able and willing to work in Hungary can find themselves a job, but “in order for there to be a will, the people have to see that working is worthwhile,” said Orbán.

As regards education, the prime minister noted the 2011 launch of the Christian Roma Professional College Network which was aimed at promoting social mobility. More than 90 percent of the network’s graduates have jobs, Orbán noted, pointing out that the educational attainment level of the Roma community was continuously rising.

The prime minister vowed that the government would continue the programme, noting that the 2018 budget allocates an extra 140 million forints (EUR 453,000) towards the network, which will be followed by an annual budget of 550 million forints starting in 2019.

Human Resources Minister Zoltán Balog said that a country could only be strong in the long run if its citizens were making progress both on their own and as a community. Over the past decades, “Hungary amassed large debts towards the Roma community”, he said, adding that there had been a lack of honesty and will in handling the situation of the community.

But  an alliance forged in 2011 led to the founding of the Christian Roma Professional College Network, Balog added. He said the network had contributed to the doubling of Roma students in higher education over the past three years.

Participants at the meeting were greeted by Ursula Mannle, chairwoman of the Hanns Seidel Foundation.