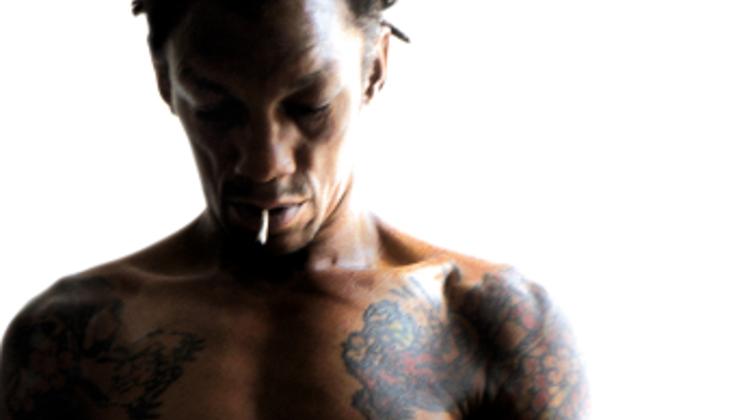 One of the ultimate masters of Bristol's trip hop Tricky released a new solo album this year! The ununiform is a great return to the "classic" Tricky sound and themes, for example one of the songs was made actually as Hell Is Around the Corner 2. Smashing triphop, dark, claustrophobic moods with iconic singers: this is the ununiform album, that after last year's show with the Skilled Mechanics Tricky is back on A38 Ship to present at a huge club-gig.

It is difficult to tell a mainstream pop icon (beside Trent Reznor) who has built such a fantastic palace of art such from pain, darkness and hopelessness as Adrian Thaws it is Tricky. The hardcore Bristol childhood - his father left the family before the birth of his son, his mother committed suicide at his age of four - Tricky lived actually on the street and had already been to jail as teenager - which left him inluenced as performer-producer up to date.

Tricky was really saved by the music: he started the Wild Bunch Bristol sound system with that DJ Milo, who now founded Skilled Mechanics. From this Wild Bunch one of the most important British orchestras of the nineties emerged, the genre-creating Massive Attack on whose first album Tricky's turned up as well.

Then he started a solo career and in an awkward pace produced more and more kivking albums. In the second half of the nineties he released five albums of tremendous influence in four years. These featured a series of brilliant guest performers from Björk to Martina Topley-Bird and Neneh Cherry to Siouxsie and Alison Moyet.

Tricky picked up his singers with astonishing sensitivity. In addition, he had fanatically melted together the sounds in which rock and metal guitars had mixed up with a dark bursting electronic base, dark-pop, embossing trip hop, which, complemented by Tricky's whisper and murmuring of the other worlds, came together to form a single swirling mass.

The 13th album released this year, ununiformon also features fantastic singers: here is Tricky's former muse and mother of his child Martina Topley-Bird, Francesca Belmonte, who also contributed to the Adrian Thaws album, and Asia Argento. The record recorded in Berlin is a real return to the dark, claustrophobic triphop of the nineties, Tricky's iconic sound.