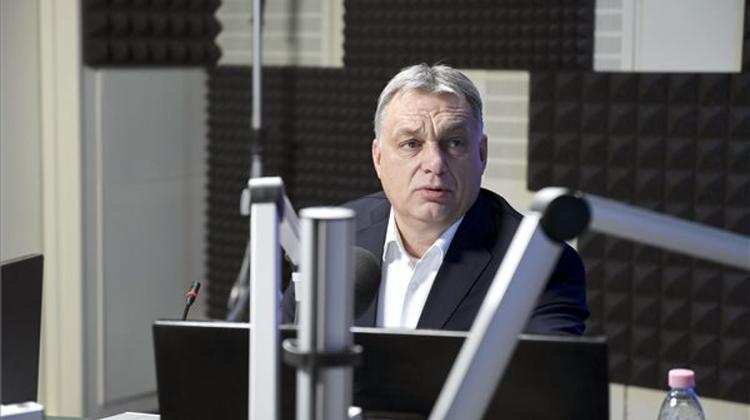 The government’s “Stop Soros” migration proposals will “create a new situation” in which “all, including George Soros can decide if they stop or continue organising and supporting illegal migration”, the prime minister told public Kossuth Radio on Friday morning.

Viktor Orbán insisted that his government wanted to prevent the country from becoming a destination for immigrants, and sought to thwart “those that organise and finance migration”. He added that the new laws would help “keep out of the country” those that continue supporting illegal migration.

He said that “pseudo-civil groups managing illegal migration” will be required to submit special reports to the authorities and their finances will be “scrutinised under a magnifying glass”; they will pay a 25 percent tax on “funds used to support migration” including funds from the European Union.

People “affected” will be banned from border zones including Budapest’s international airport, while foreign nationals could be banned from the country, Orbán said.

“We want to keep everybody outside the country whose activities are fundamentally against the interests of the Hungarian people.”

Concerning George Soros, the prime minister said that the US billionaire “openly claims that he spends a tremendous amount of money on organising and supporting migration”.

“He has a plan, under which the problem is the [border] fence, while migration could resolve the future of Europe; the Hungarian government has the opposite view: migration is the problem and the fence is the solution.” Hungary’s policy is unchanged: it will not take in migrants or resettle anyone in the country, Orbán said.

The Hungarian government never accepted the European Union’s rules on migrant quotas, and therefore “no one can demand themselves any rights based on those” in Hungary, he said.

Referring to the 1,300 refugees admitted by Hungary last year, Orbán said that Hungary complies with international treaties on asylum that have been recognised by the country’s legal system, adding that if someone is in need of international protection, Hungary will provide them with temporary protection.

People given subsidiary protection based on international law are different from migrants, he said. Migrants entered Hungary illegally, while the 1,300 individuals in question “knocked on the door” seeking protection, the prime minister added.

If they are indeed in need of protection, Hungary will grant that on a temporary basis. But once they no longer require protection, they need to go back to the country they came from, Orbán insisted, adding that they would never become Hungarian citizens.

On another subject, Orbán noted that the United States had quit talks with the United Nations because the organisation had “passed decisions to the detriment of the US”. “I share those worries and we will also have to give it some consideration,” Orbán added.

He said the UN was preparing to adopt documents “supporting global migration”, adding that the national security cabinet would discuss those plans next week. Touching upon Hungary-Poland relations, Orbán said he had a telephone exchange with Mateusz Morawiecki, his Polish counterpart, at which the parties confirmed their countries’ commitment to their earlier position on migration, rejecting mandatory quotas.

Poland can rely on Hungary’s support in terms of the EU’s infringement procedures against Poland, Orbán said. “An honest member cannot be subject to a procedure under unjustified charges.” On another topic, Orbán said that the prime ministers of the Visegrád Group — Hungary, the Czech Republic, Poland and Slovakia — would decide on the time frame for establishing a regional development bank at a summit in Budapest next Friday.

The prime minister reiterated remarks he made at a meeting of German business leaders earlier in January on seeking financing from China for infrastructure developments in the region.

The European Union’s regional cohesion funds are limited, and if funding from European institutions, such as development banks, is insufficient or too costly, central Europe needs to seek financing from outside of Europe.

One option could be China, Orbán said, noting that China is willing to finance development programmes in central Europe with better conditions than European ones. “China is not a danger but an opportunity,” he added.