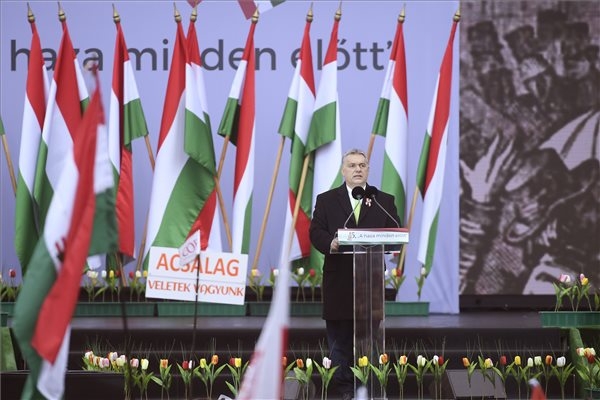 “Countries that do not stop the wave of migration at their borders will be overrun and lost,” Prime Minister Viktor Orbán said in a keynote speech ahead of the April 8 general election.

“All this is being forced on us by external forces and international powers and their accomplices here,” he said. “They see the upcoming election as the right time for this.”

In his speech marking the anniversary of Hungary’s anti- Habsburg revolution of 1848, Orbán called March 15 was the day “when the word ‘freedom’ was written into the history books in Hungarian”.

“In a little over three weeks’ time, we will once again decide on the future of Hungary. And in this election, it will not just be four years at stake.” Orbán said: “We have to ready ourselves to face “Soros’s candidate”. Orbán said it was well known that more Hungarians oppose migration than support it.

The opponents of the ruling Fidesz party “can only break up our camp” if they succeed in forming a bloc, he added. “Their aim is to address anything other than the dangers that threaten Hungary. Our opponents also know that Hungary’s fate will be decided for the next decades.

For this reason, they won’t shy away from anything,” he said. “This is our homeland, our life, and since we don’t have another one, we will fight for it till the very end and we will never give it up.”

Europe and Hungary are in the middle of a “civilisational struggle”, the prime minister said. Hungary and Europe face a mass migration wave which endangers the way of life of their people, he said.

“Europe is now under invasion.” “If we allow it, then over the next one or two decades, tens of millions of people will set off for Europe from Africa and the Middle East.

Brussels won’t protect Europe. It is not interested in stopping, but rather in supporting and organising migration,” Orbán said.

“It’s not the anemic little opposition parties we have to fight, but rather an international network that has been organised into an empire,” Orbán insisted.

“A media backed by foreign concerns and domestic oligarchs, professional paid activists, troublemakers who organise protests, the network of NGOs paid by international speculators, all summed up by the name of George Soros, who embodies them.”

“We grew out of a Christian culture and we differentiate between the individual and their actions,” he said. “We never hated and will never hate anyone; we continue to believe in the power of love and unity,” he added.

The prime minister vowed to fight against “what Soros and his empire are doing and want to do to Hungary”. “In each electoral district, it’ll be them against our candidates,” he said. “The grand plan [of the opposition] is to break up Hungary, which stands in the way of migrants, and then settle thousands and then -- over a few years -- tens of thousands of migrants in Hungary.”

In an appeal to Hungarian young professionals who have moved abroad, Orbán said: “Hungarian youth, your home needs you now, come and fight with us, so that when you need your homeland it will still be there for you,” Orbán said.

“Young people may now feel that the world is theirs … They are right, lack of ambition is mediocrity itself, and life is not good for anything if you do not do something with it. He added that the moment would come, however, when “they will wake up to the need to have a place, a language, a home where one can live safely …”

Concerning the past eight years of Fidesz rule, Orbán said: “Hungarians were alone in 2010 when we stood up, revolted, and started fighting in Brussels and in other centres of the empire ... Later Poles, Slovaks, and Czechs joined in support of the Hungarian government’s efforts.”

Holiday Programs In Budapest On 15 March