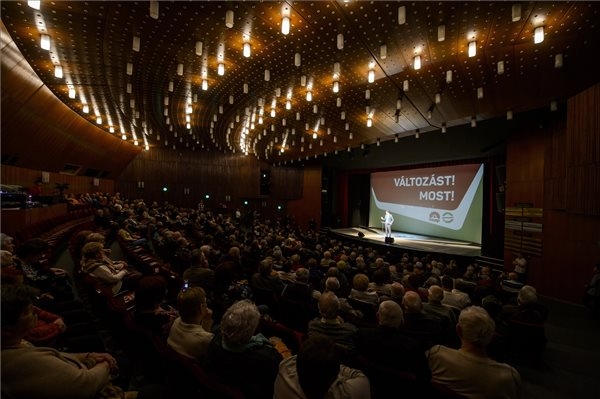 I’m afraid that, despite the many signs of renewed interest in the election and a widely perceptible desire to remove Viktor Orbán from power, the members of the opposition are not helping the electorate make a clear and easy choice.

In the past week it has become obvious that Jobbik is not interested in cooperation. Gábor Vona and his fellow politicians stated many times that they will not recall their candidates in any of the 106 electoral districts. Jobbik’s message is clear.

They believe their party will be the strongest opposition party, which will enable them to be the dominant voice in post-election negotiations in the event that Fidesz is unable to muster a majority of the votes.

LMP’s position is a great deal less clear. I assume that by now even Bernadett Szél knows that her efforts, which were considerable, haven’t produced a major breakthrough. In the last two elections LMP managed by the skin of its teeth to get into parliament, but none of the LMP members of parliament has ever won a seat outright.

As things stand now, the coming election may produce similar results. LMP’s Bernadett Szél, Péter Ungár, and Gábor Vágó walked out of the negotiations with MSZP-P and DK in the hope that they might do better with Jobbik. They didn’t.

Therefore, one would have assumed that they would take advantage of the renewed offer of Demokratikus Koalíció to sit down again and negotiate further. There would be plenty to negotiate about because LMP still has 104 candidates in the running, some of them taking a few percentage points away from the stronger MSZP or DK candidates.

LMP’s only gestures so far have been the withdrawal of their candidates in District #15 in Budapest and in District #2 of Veszprém County. In the first instance, LMP withdrew in favor of Ágnes Kunhalmi (MSZP), mind you, only after DK withdrew its candidate in District #2 of Pest County where Bernadett Szél herself is running and will most likely have a difficult time even with DK’s gesture.

The second instance was Zoltán Ságodi’s withdrawal in District #2 in Veszprém, where both Jobbik and DK, each with about 20% of the votes, are trailing Károly Konrát (Fidesz).

I believe that such an outcome is possible because we know from polls that LMP voters are flexible when it comes to tactical voting. Moreover, the majority of them are in favor of coordination. If that is case, there is the possibility of LMP not getting enough votes to reach the necessary 5% threshold for parliamentary representation.

In addition to the general confusion that exists in opposition circles, some left-of-center opposition leaders have managed to muddy the waters further. One problem, I believe, is the relative political inexperience of politicians who now find themselves in the limelight.

Just this past week the two left-of-center candidates for the premiership, Bernadett Szél and Gergely Karácsony, made statements that unfortunately only reinforced the sense of uncertainty concerning the viability of the left-of-center political forces.

The candidates got into trouble when they offered confused explanations about the “world after Viktor Orbán.” I understand the media’s interest in the subject because there is a general fear that even if the opposition parties garnered the majority of the votes, this motley group of politicians wouldn’t be able to govern.

Therefore, reporters want to know about the party leaders’ ideas about the future. Such questions should be sidestepped; the task at hand is winning the election. That’s the hurdle. That is their job right now.

But no, they got involved in all sorts of explanations, which in Karácsony’s case revealed his ignorance about such a basic concept as “caretaker prime minister” (ügyvezető miniszterelnök).

Let’s face it. This is incomprehensible nonsense.

Bernadett Szél fell into the same trap. She felt compelled to talk about the fate of Péter Polt, the chief prosecutor, after the fall of Orbán. Polt has been an insurance policy for crooked Fidesz politicians in the last 12 years.

According to Szél, “if Péter Polt after the change of government is ready to do his job and doesn’t merely save the skins of Fidesz politicos, then he can stay. If not, then he is professionally unfit and must leave.” Her later explanation on her Facebook page wasn’t convincing, at least in my opinion.

Such unfortunate statements are most likely unavoidable, especially after months of pretty hard campaigning. Karácsony’s interview on ATV’s Start with Krisztina Bombera, however, was something else.

Half of the interview was spent on Jobbik-bashing, which he admitted at the end was unnecessary because, after all, Jobbik is not ready to cooperate with them. But then why did he feel compelled to emphasize that there are Nazis among the Jobbik leaders?

His conviction is that Jobbik is the same old anti-Semitic Nazi party as it was in 2012 except “it is now presented in different packaging.” Perhaps the old Jobbik was better, he continued, because then the party didn’t try to hide its true colors.

Again, my question is: why are we talking about this now? Jobbik made it clear that they have no intention of arriving at any kind of understanding with the left. Therefore, MSZP doesn’t have to make a decision; the decision was made for them.

Attacking Jobbik, the strongest opposition party, and Vona instead of Fidesz and Orbán is the greatest folly. It sidetracks the whole campaign. MSZP’s only task right now is to do its best in the next two weeks in an anti-Fidesz, not an anti-Jobbik campaign.

The majority of Hungarians want a change of government, but the voters are not getting much help from the leaders of the opposition parties, I’m afraid.

A couple of days ago I was beginning to be optimistic, but in the last two days my optimism has vanished. Hódmezővásárhely gave the opposition parties a chance. They are doing their best to blow it.