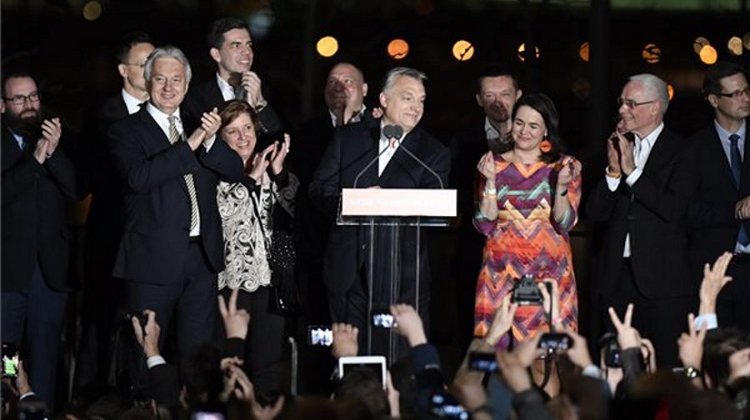 Germany and Hungary have strong ties going back to a long and fruitful history and partnership, Seibert cited the chancellor’s letter as saying. The controversial issues in the two countries’ relations, such as migration, “won’t be overlooked”, Seibert said, adding that the chancellor and Germany were ready to develop bilateral ties “within the framework of our shared EU membership and European values.”

Israeli Prime Minister Benjamin Netanyahu congratulated Orbán on his election victory by phone and invited him to pay a visit to Israel in the near future. Netanyahu paid an official visit to Hungary last July, making him the first Israeli prime minister to visit Hungary for several decades.

European Commission President Jean-Claude Juncker said he would call Orbán on Tuesday to discuss with him important and topical issues of “common interest”, the commission’s spokesman said on Monday.

The commission is “looking forward to cooperating” with the re-elected Hungarian government and “tackling various future challenges,” Margaritis Schinas said at a regular press briefing.

“The EU is a union of democracy and common values,” Schinas said, adding that the commission and its president believe that defending these values is a “common duty of all member states, without exception”.

Juncker will write to Orbán later on Monday to congratulate him on his party’s election victory, he said.

Manfred Weber, group leader of the European People’s Party (EPP) in the European Parliament, also congratulated Orbán on his “clear victory”. “I look forward to continuing working with you towards common solutions to our European challenges,” Weber said in a tweet.

The Austrian chancellor congratulated the Hungarian prime minister on his party’s election victory on Twitter. “Hungary is an important neighbour and economic partner for Austria,” Sebastian Kurz said, adding that he was looking forward to continuing cooperation with Orbán.

Other leaders to congratulate Orbán included Andrej Babis the Czech prime minister, Aleksandar Vucic the Serbian president and Horst Seehofer, head of the Christian Social Union (CSU), who said the CSU had always viewed Orbán as a partner.

Seehofer, who also heads the federal interior ministry, said the Hungarian prime minister had emerged as a resistance fighter against the Communist dictatorship and had kept his voters’ trust ever since.

Joerg Meuthen, co-leader of German nationalist Alternative for Germany (AfD), said on Monday that Prime Minister Viktor Orbán had won a “truly resounding victory” with an agenda defined by “the interests of his people”.

“Orbán is willing to take on confrontation to achieve his goals,” Meuthen said in a Facebook post, adding that the Hungarian PM had made a command to halt “the unregulated influx of culturally foreign migrants into the continent.” He called on “EU elites” to introduce reforms giving member states greater sovereignty.

Matteo Salvini of Italy’s centrist right Liga party, who won the March general election in Italy and is in coalition talks to form a government, said on Twitter that “Hungarians have voted with their hearts and minds, not heeding Brussels’ threats and Soros’s billions.”

Konstantin Kosachev, head of the Russian upper house’s foreign affairs committee, said the Fidesz victory reflected the “citizens’ responsible and pragmatic take on the protection of national interests, as opposed to obligations towards the European Union and NATO.”

PM Orbán: ‘Hungary Has Embarked On Its Chosen Path’