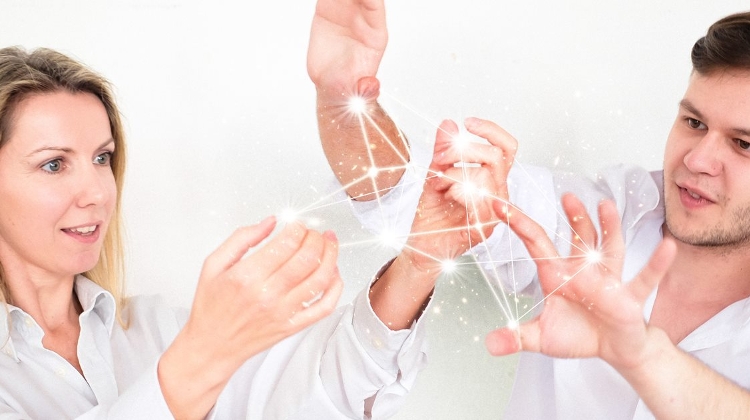 The premier of ’Constellations', an English Theatre performance by Nick Payne. This is production of Asterion project from Budapest.

"Nick Payne’s drama lasts just over an hour but packs in more than most shows manage in three times that length. It is playful, intelligent and bursting with ideas, but also achieves a powerful undertow of emotion."

"In fact, quantum theory plays a big part in a piece that is also a boy-meets-girl romantic comedy which shades into something much sadder. Roland is an easygoing chap who makes his living as a bee-keeper.

At a barbecue he meets Marianne, a warm, intelligent, and witty woman who works at Sussex University in the field of quantum cosmology. At one point in the play she describes how the theory of relativity, which “covers the sun, the moon and the stars”, is at odds with quantum mechanics, “which takes care of molecules, quarks and atoms”.

A by-product of these apparently conflicting theories, she suggests, is that we could be part of a multiverse in which at any given moment several different outcomes can exist simultaneously.

The genius of the play is that it shows this theory in action. As the two characters meet in a succession of scenes, Payne repeatedly shows different ways in which their encounters could have turned out as a result of factors ranging from previous relationships to the precise words and tone of voice employed.

The piece expands into an investigation of free will and the huge role that chance plays in our lives."

Ticket prices: HUF 2700
Tickets available every day on the spot, Serbian Cultural Centre or can be reserved on asterion56@gmail.com