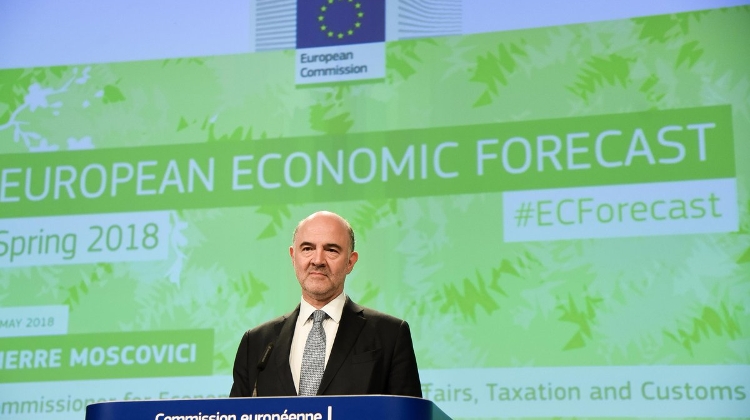 The European Commission raised its projection for Hungary’s GDP growth this year to 4% in a fresh forecast. The projection was raised from 3.7% in a forecast released in February.

The EC said short-term business indicators and surveys point to sustained growth momentum in early 2018. GDP growth is expected to remain close to 4% this year, but is forecast to slow down in 2019 as the level of investment reaches a plateau and the tailwinds supporting consumption moderate.

Corporate investment is forecast to grow vigorously, supported by high capacity utilisation, FDI inflows, and the rising absorption of EU funds. The investment-to-GDP ratio may rise to 25% by 2019.

Household income and consumption growth are likely to remain strong in 2018 but are expected to slow down in 2019 as the impact of past administrative wage increases fades.

Export growth is expected to remain stable, though imports will continue to outpace exports due to the rapid growth of investment and durables’ consumption.

The trade balance and the current account surplus are expected to narrow, although the rising absorption of EU funds will keep net lending stable.

The unemployment rate is projected to decrease to 3.7% in 2018 and to 3.6% next year. The EC forecasts a 2.3% inflation rate for this year, down from a 2.8% forecast in February. Inflation in 2019 is expected around 3%, slightly up from the previous estimate.

The budget deficit is set to rise to 2.4% of GDP this year as an effect of further tax cuts, reduction in the employers’ social contribution rate and the phase-out of temporary receipts from land sales and an extra item in corporate tax payments.

The deficit is expected to narrow to 2.1% of GDP next year. The reduction in the public debt is expected to slow down in 2018, with the debt ratio decreasing to 73.3%. It could fall to 71% by the end of 2019 due to the high rate of nominal GDP growth forecast, the EC said.