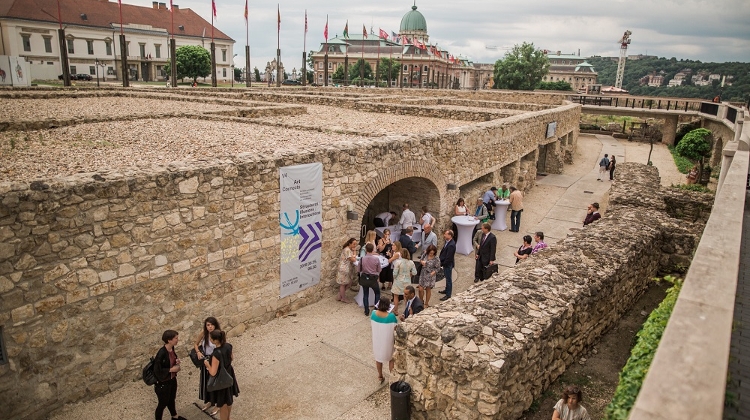 On until 30 June. The V4 Art Connects exhibition series offers a sampling of art from the countries of the Visegrád Group – the Czech Republic, Hungary, Poland and Slovakia – along a wide range of the spectrum in terms of genres.

The community and diversity of the V4 nations have created a unique spiritual heritage. These contemporary art exhibitions present our common culture, artistic traditions, exciting gastronomy and creativity in an innovative way.

The series can be viewed at various locations in the Buda Castle District in Budapest, and comprises three parts: Structures is dedicated to sculpture, Illusions to video art, and Interactions to the traditional branches of fine arts, with special emphasis on painting and graphic art.

While these selections could be interpreted as three autonomous exhibitions, they seek to draw the audience’s attention to the high-quality, multi-faceted art of the region through a framework program that connects these sections with regard to both their geographical locations and their content.

From the unique cultural milieu of the Visegrád Region – shaped by its special cultural and artistic climate and it its shared historical past which has forged a kind of intellectual and psychological community among these countries – certain artists, including some featured in the exhibition series, have shown prominence by accomplishing significant achievements on the broader international scene in the decades that have passed since the political and social regime change.

It is the express objective of V4 Art Connects Exhibition to present this generation of artists and, in the language of contemporary art, render tangible that which culturally connects the countries of the Visegrád Group.

This group selection, which draws on the younger generation of artists, is built on mostly new works, some of which have not been presented in the context of large-scale international art programs such as this one.

The praxes of participating artists cover virtually all media and art technique. It aims to offer insight into the perspective particular to the Visegrád Countries through presenting works by artists who have been known to break away from earlier artistic traditions (such as the conceptual approach that had been typical of the region in preceding decades), to claim independence from the usual genre-bound limitations, and to loosen – and even cross – the boundaries that separate individual genres.

This approach, as well as a penchant for experimentation with various techniques and the explicit aim of presenting the artist’s message in a form more spectacular than what is afforded by traditional techniques, are all unique characteristics specific to this generation of artists.

The exhibiting artists, in addition to their drive for myth creation also have a characteristic tendency toward personal storytelling and presenting cross sections of society based on their own private observations – all of which facilitate audience activity, participation and involvement.

Through its diverse selection and richness of genres, the exhibition seeks to offer deeper insight into the multi-layeredness of the art of the region and the pluralism of expression that characterizes this artist generation, as well as to provide a broader context for wider, more subjective interpretations.