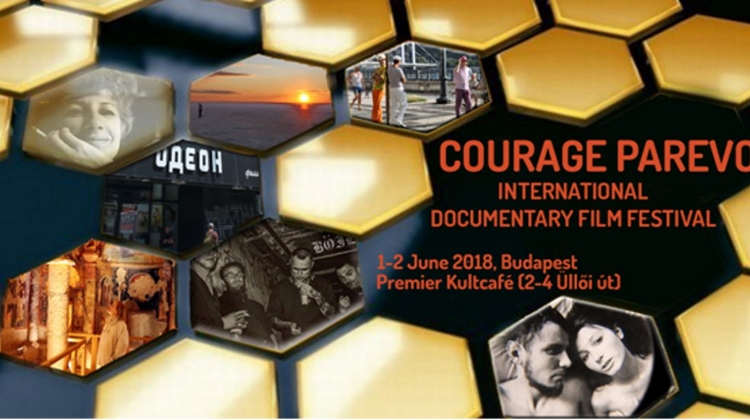 This unique film fest presents the counter-culture of the former socialist countries in Eastern Europe. Stories about silenced artists, Budapest punks, Chuck Norris in a woman’s voice, graffiti dwarfs in Poland, and the generation of 68'ers.

"The golden stories of which we never speak"
The stories which not only defined the lives and trajectories of a generation, but changed half of Europe.

All films come in their original languages with English subtitles. 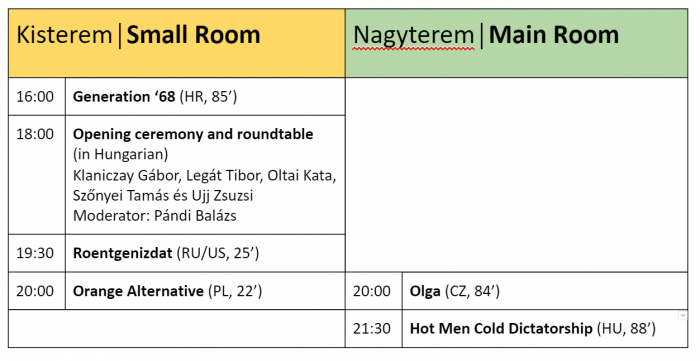 Homage to a generation. The creator still shares the youthful enthusiasm of his generation, and he nurtures the idea of a revolution that will change the world. A revolution that remains “realistic and demands the impossible”. The Croatian film poses the question: how did the events of the era affect ordinary lives and society, and it shows what later generations can do with this legacy.

In 1982, graffiti images of orange dwarfs appeared on the walls of buildings in Wrocław. They “migrated” to other cities too. These dwarfs emerged as the symbol of the countercultural formation “Pomar Alternativa” (Orange Alternative).

The police couldn’t break her, the castle didn’t change her: the remarkable story of Václav Havel’s reluctant first lady. Olga was a key intellectual in the 1950s and 1960s, who read his husband’s texts with a critical eye, and supported him in the hardest times. The documentary sheds light on the era in which Olga lived and on Olga herself presenting her highly original thoughts and memorable way of speaking.

What was it like to be a gay man before the regime change? Where and how could one get to know others? Were gay men kept under surveillance by the system? How did groups of friends develop in the decades? How did the regime change usher in change, and how did gay movement rise in Hungary? To find answers to thee questions, four young gay men hit the road.

Why were the most creative and progressive artists in Yugoslavia silenced? Why are they still silenced today? The answers presented in this film are the results of ten years of hard work. They show us the exceptional avant-garde art scene of Novi Sad (concept art, experimental music, poetry) which emerged during the late 1960s and 1970s as a cultural melting pot of innovative Yugoslav nonconformist culture.

In 1987, a British film crew gained unprecedented access and was able to film everyday life inside the GDR – but only the side of life that the state let them see. 25 years after the fall of the Berlin Wall the crew returned to the places and people they had visited at the time to see how their lives have changed and how they recall the “workers’ paradise”.

In 1980s communist Czechoslovakia an emerging generation took inspiration from alternative culture, including punk rock and the neo-avantgarde, to create their own worldview, politics, and, eventually, a revolution leading to regime change. 25 years later, this unique generational perspective, more relevant than ever, is explored for the first time.

Harmless tourists or enemies of the system? The documentary is an exciting inquiry into how forbidden literature was smuggled to Czechoslovakia under the communist dictatorship. Why did people put their own freedom at risk in order to help preserve the inner freedom of others?

Sofia, Odeon Cinema: a legendary place. The city’s only archive cinema opened in 1961. Who were the guests of Odeon over the course of its existence? How did film censorship work under communism? The documentary opens a window to the Bulgarian urban culture of the past six decades.

Budapest around 1989: concerts in stuffy basements and ruined “houses of culture” filled with sweaty youngsters in search of meaning in their lives. This film recalls the golden age of the Hungarian hardcore/punk subculture, and it asks what happened to this culture. How did the scene affect society, and what role did Budapest play in the history of punk? Which were the best bands, clothing shops, cultic pubs? What ideas did this environment creat and how have these ideas shaped thinking in Hungary up to the present day?

Painter and writer Józef Czapski was a towering figure of Polish exile. Once a follower of Cézanne, he witnessed the Russian Revolution, fought for the Polish case, was taken as a POW, and lived in post-war Paris, where he edited the most significant Polish émigré journal, Kultura. Take a journey through European history by learning about his extraordinary life.

The illegal importation of American action and religious films on VHS cassettes was a common practice in Romania during the Ceaușescu era. Since there was no official dubding, all the actors had the same voice. The most famous voice of these dubbed films was Irina Margareta Nistor, who was the voice in Romanian of an array of American stars. This film recreates the epoch’s depressing and, at the same time, sweet-and-sour atmosphere.

A polyphonic sound captivates listeners. But what if an acappella choral performance is the work of a single person – the great jazz singer Yildiz Ibrahimova? Through the dramatic twist and turns of her life and music, we see shocking footage of the expulsion of the Bulgarian Turks across the border and the tragedy of their ruined lives.

A story about a rebellious genius of photography, Vitas Luckus, and his passionate love for Tatyana Luckiene. Vitas was an extremely colourful personality: he kept a live lion in his apartment and he was among the first to document the flawed realities of the Soviet Union. A story about love and infidelity, freedom and conformity, hope and frustration, lies and the search for truth.