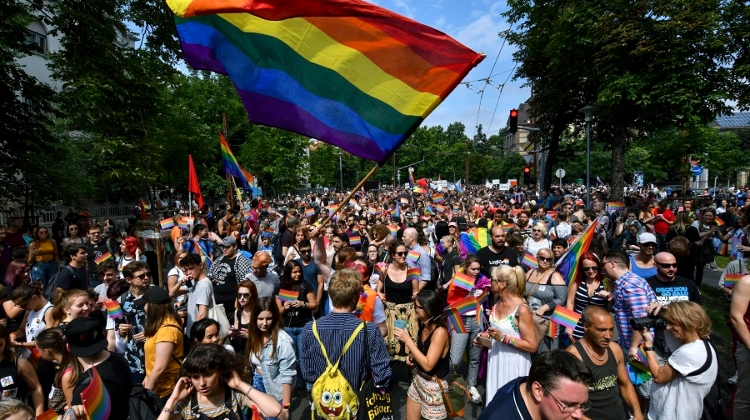 The 23rd Budapest Pride march marking the end of Hungary’s month-long festival of the LGBTQ community was held on Saturday afternoon, with participants gathering near City Park and later moving across central Budapest without any significant incidents reported.

The march, led by a rainbowdecorated truck, proceeded along Andrássy Avenue, Nagymező Street, Bajcsy-Zsilinszky Road, Alkotmány Street, and ended at Kossuth Square in front of Parliament late in the afternoon.

Szilvia Nagy of the organising Rainbow Mission Foundation said at the start of the event that the march was a way of protesting against social exclusion and celebrating love and the diversity of the LGBTQ community.

The march was attended by NGOs, company representatives as well as members of the opposition Socialist Party, Párbeszéd, the satirical TwoTailed Dog Party and Momentum, Nagy said. Participants were greeted by counter-demonstrators at Kodály Körönd who held up a banner that read “Your queerness is disgusting”.

Others revved their motorcycles. Another group of counter-protesters gathered at Oktogon. A few managed to breach the cordon protecting the marchers, but police corralled them into a gateway. At Kossuth Square, Ádám Csikós said on behalf of the organisers that the state should grant same-sex couples the right to marry and raise children.

He said he was proud that some 100 events were organised during the month-long Pride festival in Budapest and five other cities. At the same time, Csikós voiced his frustration over what he called a lack of equal rights for LGBTQ people.

During the closing speeches at Kossuth Square, a European Union and a rainbow flag were hung from one of the windows of Parliament. The leftist opposition Democratic Coalition had said in a statement that its MPs would greet the march by hanging Pride and EU flags from the windows of their offices.

The Budapest police headquarters (BRFK) told MTI that officers had conducted ID checks but no other intervention was required during the event.