Creative Cave In The Depths Of Budapest: Jancsó Art Gallery 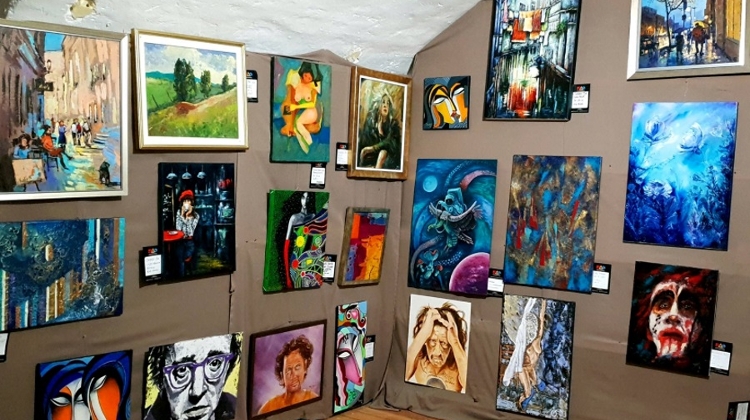 Anyone can exhibit in the Jancsó Art Gallery – that's part of the concept. And so since 2014 art from all kinds of artists, times and styles can be found here.

The Jancsó Art Gallery can be found in the depths of the capital's party district, just a stone's throw away from Budapest's oldest ruin bar, Szimpla Kert.

The gallery in the basement of a residential building does not live up to the expectations one has about a typical art showroom. Instead of a few stills and landscapes on otherwise empty, white walls, dozens of pictures hang side-by-side here, covering pretty much all available space.

A gloomy Donald Trump looks down on you, you see Budapest in bright colours, an unconscious young woman is floating under the water or a cubist figure laughs in your face. Switched colours, abstract representations and modern elements mixed with classic influences contribute to the diversity.

Currently more than 20 artists are exhibited here. But even if Zoltán Jancsó does not single out one of them, they are all in the spotlight of attention.

The gallery of Jancsó differs from conventional showrooms in the way that it is also used by some artists as a studio.

Cool bar music fizzles out of a few old speakers, creating a laid-back, relaxed atmosphere. Basically, the Jancsó Art Gallery is a kind of art cave – a description much better fitting than the term gallery. For Zoltán Jancsó it is important that visitors feel at home, not as intruders in a strange world. The same applies, of course, to the artists.

Everyone is allowed to exhibit

"My approach is that I allow all the artworks to be exhibited that have something special for me," explains Jancsó, who opened the small gallery in 2014. Under "special" he understands that the image should radiate a certain liveliness, regardless of it depicting humans, animals or objects. In fact, even art amateurs usually find something peculiar about the gallery. "Somehow different, but different in a good way" is the verdict of many visitors.

But despite being open to all, some things are still missing. "You will not find any normal landscapes here" says Jancsó, who, in addition to his work as a gallery owner, also works as an artist. His own works can also be admired in the cave.

Initially, he allowed anything to be displayed, but when the number of applicants exploded he had to make some choices. Nevertheless, his motto remains the same: Everyone is allowed to exhibit. The reason is that I don’t require an art diploma, he says. “The only thing I care about is the artwork and the eventual recognition value of the artist.”

The idea of offering an exhibition platform for as many artists as possible came to the 48-year-old Hungarian shortly after his return from Mexico, where he spent years from 2010. He almost stayed there, but because of his now 15-year-old daughter, he moved back to Budapest. Here he eventually took the last step and opened his own gallery.

When Zoltán Jancsó contracts an artist, he lets them rent a certain square footage for a certain price. The artist then can fill this space as they like and set the selling prices for their works.

"I do not want to assess how much money their art is worth, this decision is up to them," Jancsó explains. However, after the sale, the gallery owner will receive 25 percent as commission. Works of every price range and size can be found in the gallery starting as little as HUF 15,000.

But not only does Jancsó exhibit the works in his gallery, he takes them on the road to other exhibitions – Lake Balaton, Eger or other Hungarian cities – and advertises them on the internet.

Among the artists he represents is Mónika Nikodém, the young woman with the apron and the spatula. She has had her works displayed in the cave for two years now and has even contributed to the renovation of the gallery. Jancsó is trying to show that there is a lot of talent in Hungary and that, to see good art, you do not have to travel to Paris or to other big cities abroad.

From taxi driver to artist

Jancsó is especially proud of the fact that many of the artworks in his gallery have been exhibited all over Budapest: some in Szimpla Kert, the popular ruin bar that attracts hundreds of visitors night after night, just a few metres from the gallery.

The artist has been friends with the owner of the bar since his time in Mexico, where they met by chance. In an English journal Szimpla Kert was once called a world-class bar, not in a small part because of the art on display there.

Such positive feedback confirms Jancsó’s commitment to keeping it going. This has been sort of a motto throughout his life. He only became an artist about 18 years ago, working various jobs before that. Sometimes in the military, sometimes as a restaurateur, sometimes as a taxi driver or baker, but his mantra of keeping it going has been a constant throughout the years.

He grew up in a family where the children were taught to learn a decent job. Therefore, Jancsó repressed his love of painting for years. It was a particularly dark period of his life that led him back to his passion: his mother's sudden death when he was 18, and his brother's passing in 2000 were a heavy burden on him.

The only thing that helped him process his grief was painting. Through art he had found a way to escape reality. After picking up a brush he quickly reconnected with his long-lost love and realised that this was the career he wanted to pursue.

An expression of true emotions

But for Jancsó, art is more than just a career: it is love, sadness, joy. Simply put, pure emotion. He likes to stay in the gallery even when it's closed, to paint with music and a glass of wine. He does not need natural light. He just has to feel good in the moment.