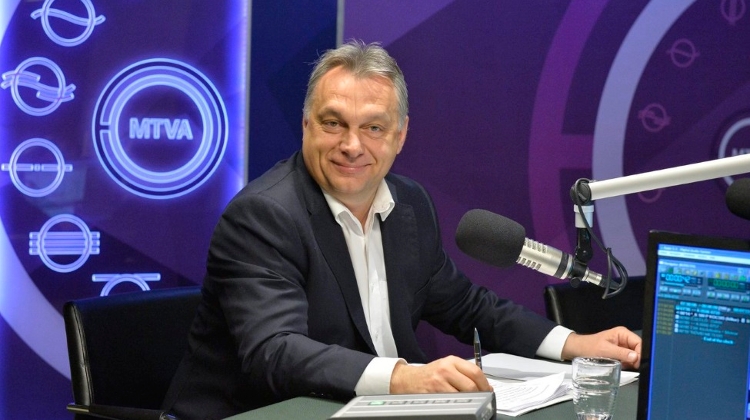 Prime Minister Viktor Orbán, in his regular Friday interview to public broadcaster Kossuth Radio, said the European Commission’s days are numbered, noting that its mandate is set to expire next May

Orbán reacted to the recently-launched infringement procedures against Hungary over its “Stop Soros” law and related constitutional amendments as well as the EC’s proposal to pay 6,000 euros per migrant to member states that accept them.

The prime minister dismissed the EC’s decisions, saying that the executive body was “out of time” to see them through. Now it is all about finding a way to make it to May, he said.

Orbán said the question of how the EU spends people’s money was one of principle, calling the idea to give the money to migrants “a dangerous line of thought”. Orbán said the new commission should not punish countries that protect the EU’s borders.

The prime minister called Hungary one of the world’s most politically stable countries. He said there was no other country where a government could secure three consecutive election victories with a parliamentary supermajority.

The advantage of political stability can be used to make it clear to the world that the Hungarian government’s policies are predictable, Orbán said.

There have however been “dark clouds” appearing in the global economy, he said, adding that nobody had the courage to speak publicly about “a crisis looming”.

Orbán said the 2019 budget had been drafted with increased reserves to shield the country against possible “unfavourable changes in the global economy”. He also said that as long as Hungary had a Christian Democratic government, the purchasing power of pensions would be preserved.

Orbán said his government had given back to pensioners the money that the previous, Socialist-led governments “had taken away” from them. Speaking about his busy diplomatic schedule over the past month, during which he met a number of world leaders, Orbán said the last several weeks had been successful ones for Hungary.

The prime minister said his recent high-level meetings would make the country stronger and have a positive effect on the economy. Investors can also rest assured that there are no political risks to their endeavours in Hungary, the prime minister added.

When asked about former White House chief strategist Steve Bannon’s movement aimed at bolstering conservative political groups in Europe and offsetting the activities of US financier George Soros and his organisations, wished success for Bannon’s efforts.

Orbán welcomed the spread of American conservative ideas, saying that until now, “only the liberal ones could be heard”. The prime minister said he could not remember a year going by over the past three decades without the US interfering in Hungary’s internal political affairs.

The US typically interferes in other countries’ affairs through foundations, he said, adding that this practice was “hard to ward off”. Hungary defends against it by asking for transparency, Orbán said.

Soros’s foundations finance 67 “pseudo-civil organisations” in Hungary, he said, adding that voters should be made aware of whom Soros or Brussels are funding with the aim of interfering in Hungary’s internal affairs.

On another subject, the prime minister noted that on Saturday he is scheduled to address the Bálványos Summer University in Băile Tușnad (Tusnádfürdő), in central Romania, before starting his summer holiday on Monday. “I’m at the end of my tether, it’s high time I recharged my batteries,” the prime minister said, assessing his past year.