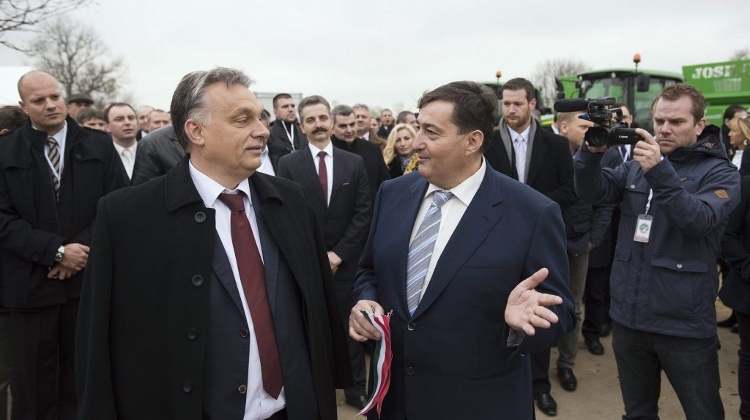 Lőrinc Mészáros is undoubtedly the most successful businessman in Hungary: he became the second richest men in the country within a few years.

His lucky streak continues: in July his companies won public tenders worth 280 million euros. His companies won these tenders either alone or as members of different consortiums.

Atlatszo is tracking the success of 10 businessmen and/or companies who have close ties to the Orban government. Every month we look at how many public tenders they win. Most of the income of these companies comes from public tenders, that is, taxpayer money.

According to the data the second most successful businessman in July was László Szíjj, a business partner of Lőrinc Mészáros. Szíjj and his companies won public tenders worth 201 million euros.

What kind of tenders did they win in July?

He earns the biggest amount of money by taking part in railway reconstruction projects. His companies take part in two such projects, both parts of a consortium, and the total value of those two public tenders is 81.8 billion forints.

Szíjj is the most important business partner of Mészáros. His companies won public tenders worth 201 million euros alone or as members of consortiums.

Duna Aszfalt (as a member of a consortium) also won a framework contract for infrastructure development in the town of Szolnok. The value of the contract is 15 billion forints.

This construction company owned by Attila Paár is part of a consortium reconstructing a monastery in Majk. The other member of the consortium is Fejér-B.Á.L. Kft., owned by Lőrinc Mészáros’s children. The value of the project is 1.9 billion forints.

WHB is also going to build a swimming pool in Szeged together with Dél-Konstrukt Zrt. for 12 billion forints.

The other companies on the list won much smaller tenders, which shows how distorted this ’market’ is. ZÁÉV is a construction company; Gyula Balássy has advertising agencies and Valton is the government’s favored private security company.