Opinion: Does Viktor Orbán Want To Be The Donald Trump Of Europe? 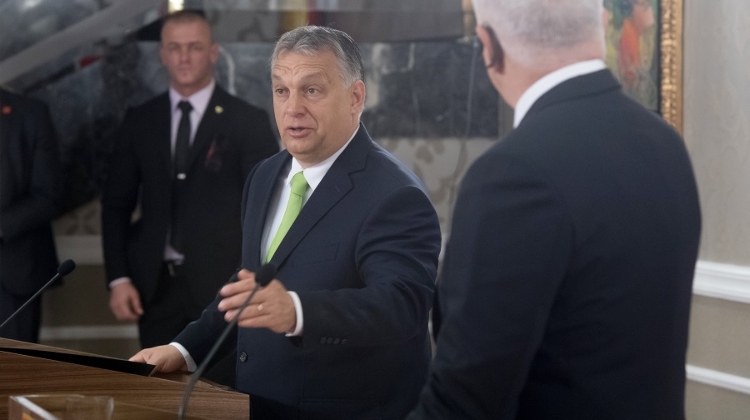 In the last couple of days there were at least four or five sources which, with the utmost seriousness, claimed that Viktor Orbán in his speech at Tusványos announced his candidacy to become the president of the European Union.

The first such reference appeared in Le Monde, in an article that discussed an Orbán interview which appeared in Das Bild, a German tabloid.

In it the Hungarian prime minster didn’t hide his dislike of Emmanuel Macron and Macron’s vision of the future of Europe. The author of the article, Blaise Gauquelin, the Vienna correspondent for the paper, is convinced that from this interview and Orbán’s speech at Tusványos it is clear that Orbán is seriously thinking of leaving Hungarian politics altogether to become the next president of the European Commission.

Richard Szentpéteri Nagy, a constitutional lawyer and political commentator, tried to pour cold water on Gauquelin’s hypothesis by pointing out that Orbán doesn’t have the necessary support in the European Council to entertain such dreams.

Yesterday morning Ildikó Csuhaj of ATV and Péter Pető of 24.hu were guests of Emília Krug on ATV Start. There a debate of sorts developed regarding Viktor Orbán’s possible interest in becoming the candidate of the European People’s Party for the presidency of the Commission.

Csuhaj, who has extensive contacts in Fidesz, said that she had heard rumors to that effect from several sources but was unwilling to take them seriously. Pető discarded the proposition as nonsense because, first, Orbán has no intention of leaving Hungarian politics and, second, he doesn’t have the support within the European Union to execute such an ambitious plan.

Yet a day before an article appeared on b1.blog.hu by Nick Grabowszki, clearly a pseudonym, who claimed that Orbán would dearly love to take the affairs of the European Union into his own hands and that he has a chance of achieving that goal.

In Grabowszki’s interpretation, Orbán’s speech at Tusványos was the introductory salvo of his campaign to seek the position of president of the European Commission. He wants to be the Donald Trump of Europe, who will get rid of the liberal political elite. “All signs indicate the seriousness of his intention,” says Grabowszki.

Grabowszki probably bases his conclusion on the last few sentences of Orbán’s speech:

"If the elite of ’68 leaves the field, there is only one question to be answered: who will arrive to replace them? And the modest answer we must give to this is that we are on our way. Calmly, and with restraint and composure, we must say that the generation of the ’90s is arriving to replace the generation of ’68. In European politics it is the turn of the anti-communist generation, which has Christian convictions and commitment to the nation. Thirty years ago we thought that Europe was our future. Today we believe that we are Europe’s future. Go for it!"

Can we interpret this passage as Grabowszki does? He may believe that Orbán was talking about himself and his fellow anti-communists, who 30 years ago yearned to belong to the European Union but who since then have grown up and discovered that the ideals of the ’68 generation no long offer solutions to today’s problems.

Or was Orbán talking about a generation of right-wing politicians in general who came of political age in the 1990s and who today want to have a different European Union? Moreover, could these two sentences be interpreted as an announcement of Orbán’s candidacy for Juncker’s job?

As far as the first question is concerned, one can debate the intended meaning of these sentences.

I’m personally inclined not to restrict the generation of the 1990s to East European anti-communists but to look upon them as right and far-right politicians of Viktor Orbán’s ilk, both from the East and the West, whose time has arrived and who with a strong campaign can shift the composition of the European Parliament toward the right and can even remake the European People’s Party, which in Orbán’s opinion is still led by men of 1968.

As for the second question, there is absolutely nothing in these two sentences that would indicate that Orbán is vying for the presidency of the European Commission.

If Viktor Orbán were to leave Hungarian politics, his party would collapse in no time, something Orbán knows as well as anyone else. He is at the moment in the throes of putting the finishing touches on his political system and is working on its transformation into a new era that will be named after him. Why on earth would he want to leave all that behind?

Orbán only recently announced his plan for a total reworking of the constitution, which might mean transforming the parliamentary system into a presidential form of government. He just built himself a gorgeous new palace in the Castle District of Buda, which if things go well for him politically he can occupy for decades.

Why would he leave all this for a mere five years at the helm of the European Commission, which he would like to strip of most of its powers

What he, on the other hand, is hoping to do is to transform the composition of the European People’s Party, filling it with as many right wingers as possible, who could then have a Spizenkandidat (top candidate) who would reflect their ideology.

As far as Orbán is concerned, Europe “has rejected its roots, and instead of a Europe resting on Christian foundations, it is building a Europe of ‘the open society.’” What kind of Europe does Orbán want to build? He wants to recreate the “Christian Europe [where] there was honor to work, man had dignity, men and women were equal, the family was the basis of the nation, the nation was the basis of Europe, and states guaranteed security.”

An ideal society which, of course, has never existed and never will, thank God. We can rest assured that Orbán will not succeed in remaking the European Union as easily as he forced his will on the Hungarian people.