Traffic Changes In Budapest This Weekend 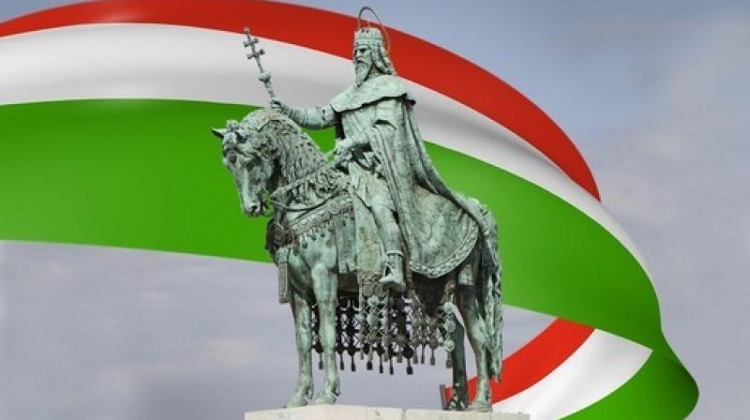 On the National Holiday on Monday, 20 August 2018, and due to related events on Friday, Saturday and Sunday (17, 18 and 19 August), several road restrictions will affect major transport routes in both Buda and Pest, Danube bridges and public transport service changes will be in place in the capital.

On those days, especially on the 20th, passengers are advised to use public transport services, particularly the metro lines, to reach the city centre. Metro line M3 operates on all days of the long weekend between Lehel tér and Kőbánya-Kispest.

Operating hours on lines M2 and M4 will be extended until half past midnight on Friday and Saturday while on Sunday lines M2, M3 and M4 will run until that late. The Chain Bridge will be closed to traffic from the early morning on 17 August, until the morning of 21 August.

Erzsébet Bridge will not be accessible from 14:00 on 19 August until the early morning on 20 August and Margit Bridge is expected to be closed from 19:00 on the 20th.

Before and after the fireworks display on 20 August, all transport services will run more frequently to provide a convenient travel experience.

Several bus and tram lines will run on modified or shortened routes due to road closures, therefore BKK recommends customers use the BKK FUTÁR journey planner online or the app on their mobile devices.

Please click here on the event programming of the Hungarian National Day (Founding of the State) on the 20th of August 2018 and the days leading up to it.

Festive fireworks on the Banks of the Danube

The fireworks display starts at 21:00 on 20 August and lasts for about 30 minutes. the best views are offered by the Danube embankments between the Chain Bridge and Margit bridge.

BKK provides more frequent metro, bus and tram services to the city centre and suburban railway lines H5 and H7 also run more frequently. Roads near the Danube both in Buda and Pest will be closed to traffic for the duration as well as for a few hours prior to and after the event.

The venue of the fireworks is best reached on foot from the metro stations in the city centre, which will be served more frequently by the metro lines.

Motorists should expect numerous road closures due to the celebrations and preparations. Due to the concert on 19 August, Szent Gellért embankment in the direction of Szent Gellért tér will be closed between Hegyalja út and Rudas Fürdő from midnight on 17 August until 18:00 on 20 August. Erzsébet híd will also be closed from 14:00 on 19 August until the morning on 20 August. Traffic restrictions will be in place in Kossuth Lajos utca as well starting at Astoria.

(The embankments may be periodically opened to cars between 12:00 and 17:00 on 20 August, passenger traffic permitting).

The Chain Bridge and the Tunnel will be closed from 20:00 on Friday until Tuesday morning.

Several bus and tram lines will run on modified or shortened routes due to road closures, therefore BKK recommends customers use the BKK FUTÁR journey planner online at futar.bkk.hu or the app on their iOS and Android mobile devices. 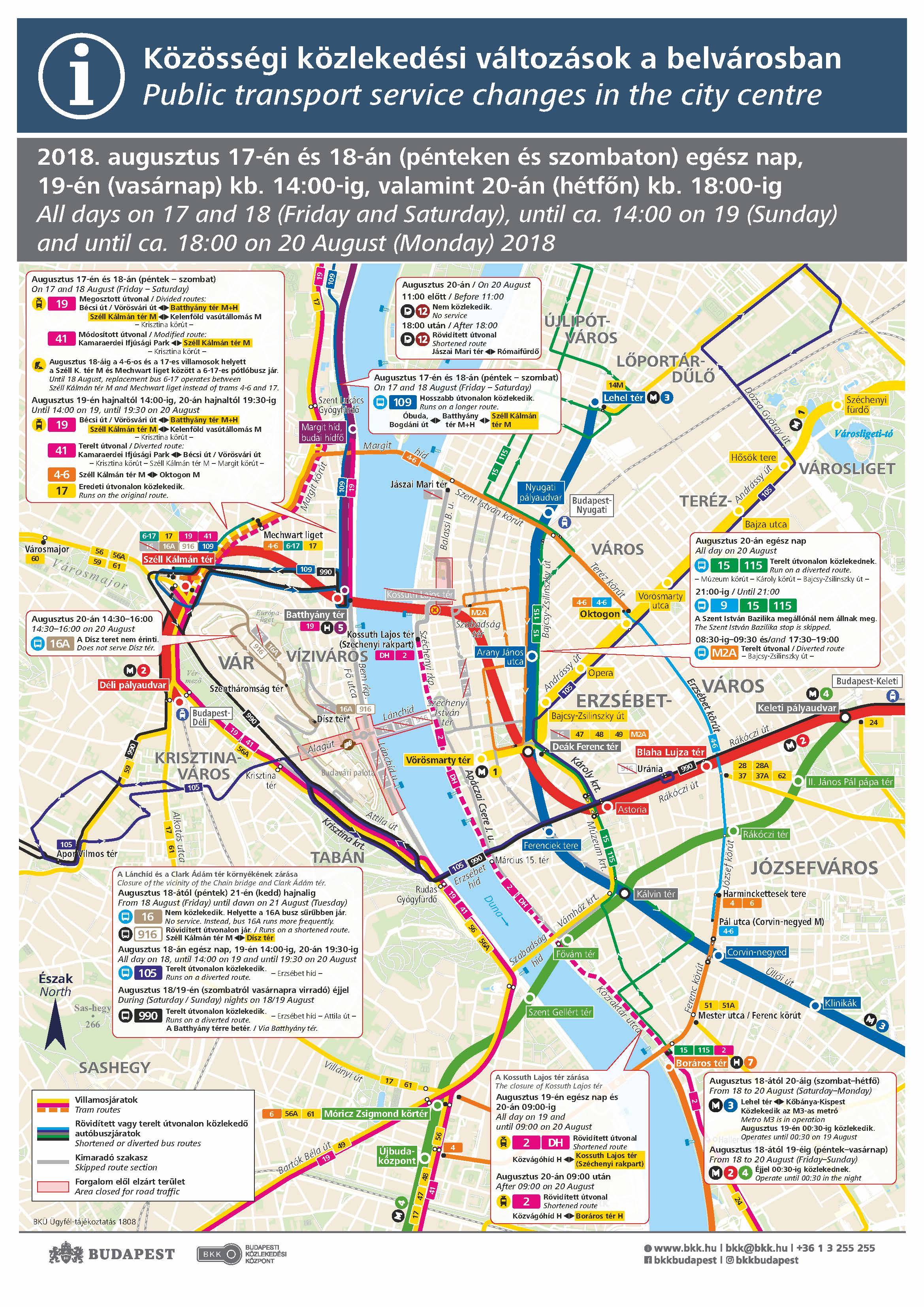 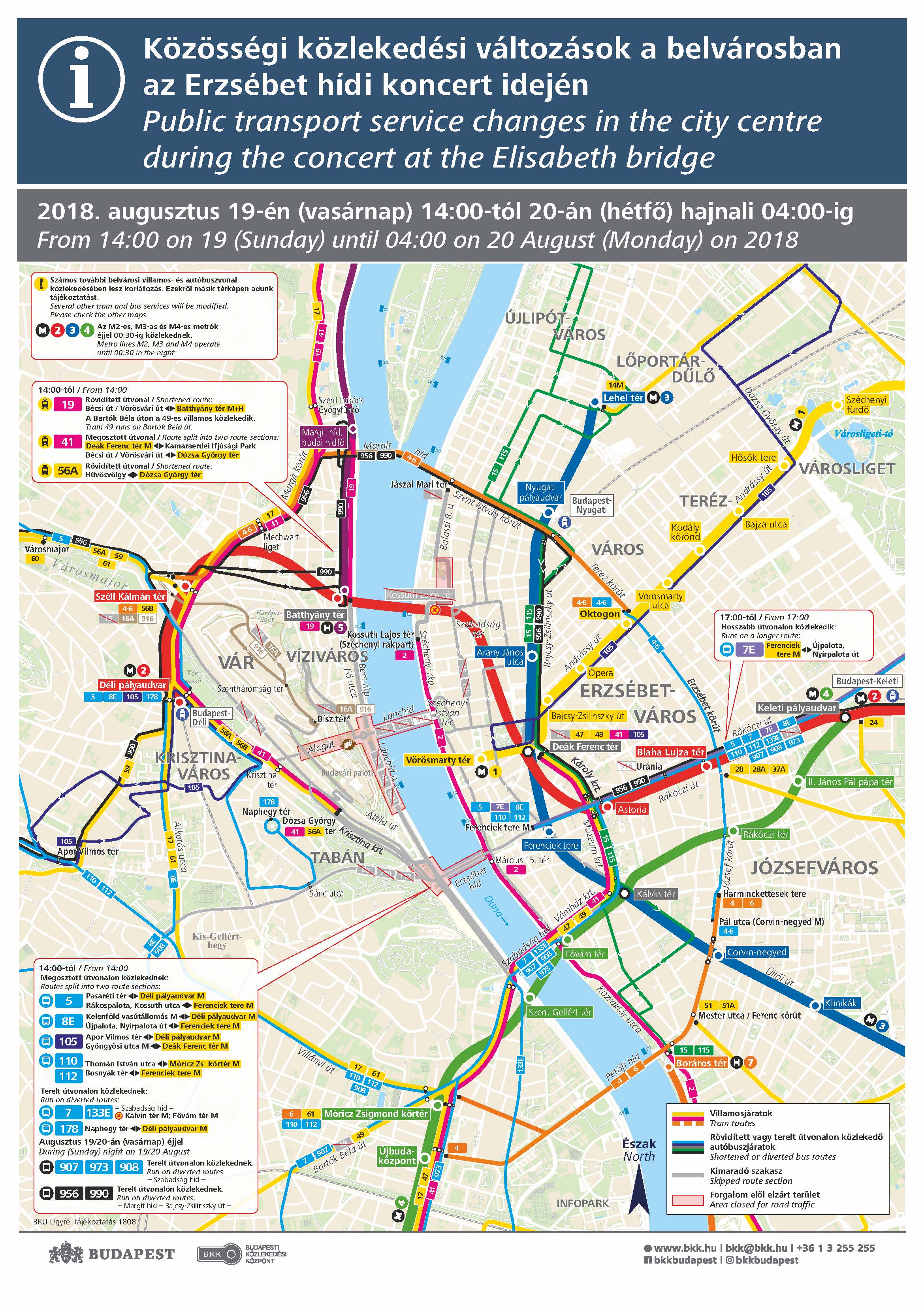 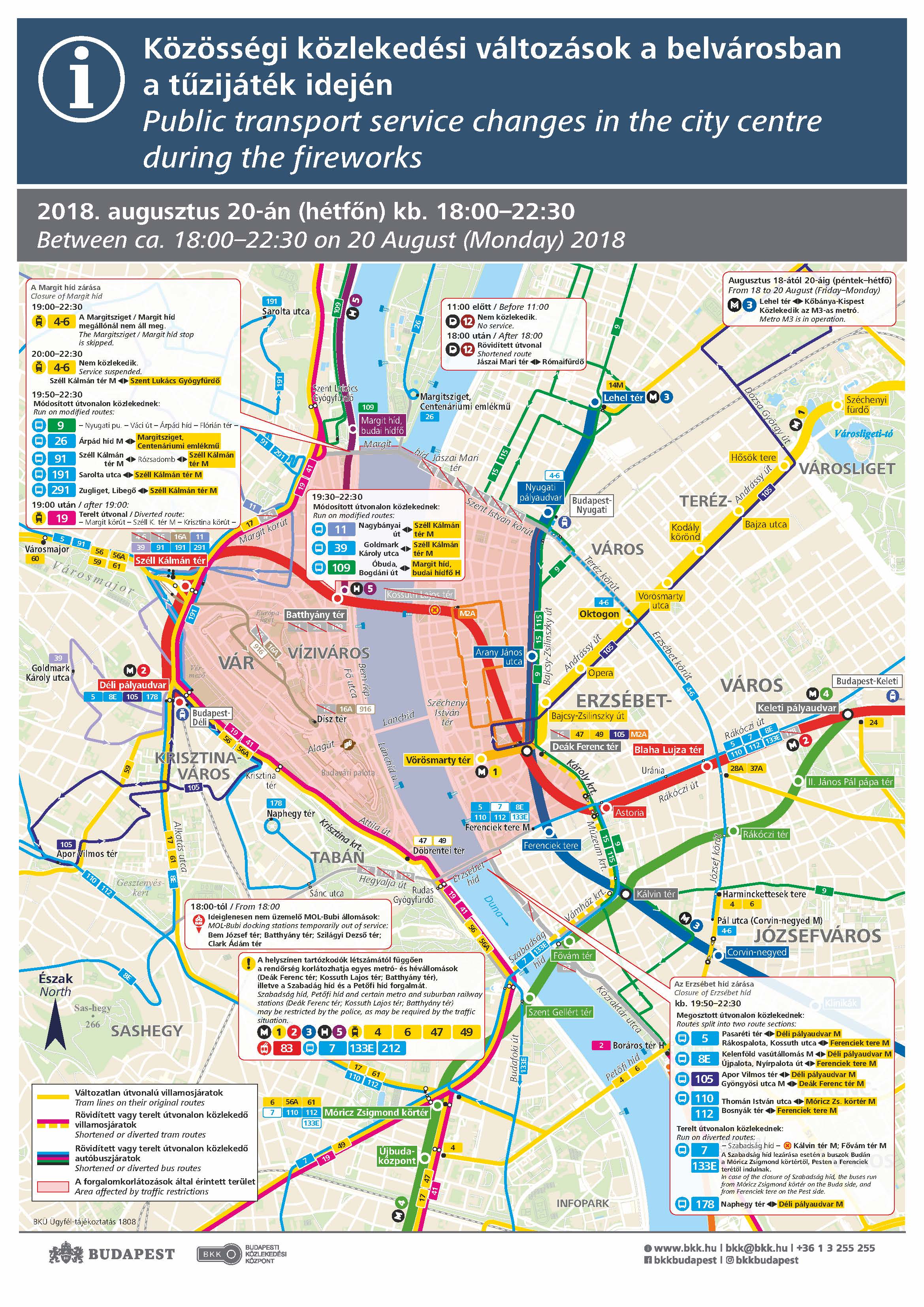