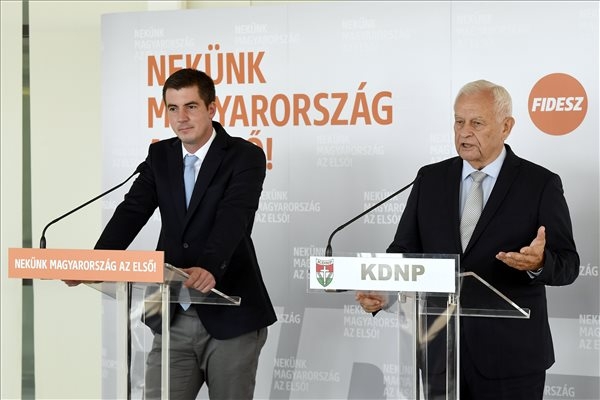 Hungary’s ruling parties will next week submit a draft resolution to parliament declaring the Sargentini report a “deceitful” document which the European Parliament “had to cheat to approve” and that Hungary will not allow itself to be stripped of its right to protect its borders, Fidesz’s group leader told a press conference at the end of a three-day meeting of the joint Fidesz- Christian Democrats parliamentary group in Velence.

Máté Kocsis said the Sargentini report had been drafted and approved by “associates of [US financier] George Soros”.

“Soros’s mercenaries have stigmatised Hungary out of revenge” because Hungarians have made their views clear on illegal migration on multiple occasions, Kocsis insisted. He said the Sargentini report violated the European Union’s Lisbon Treaty, so the Fidesz-KDNP group will ask the government to “take every possible legal step” to defend Hungary against the report.

Péter Harrach, KDNP’s group leader, said he believed the Hungarian MEPs who voted for the report were guilty of treason.

He agreed that the report had been adopted with the help of “procedural tricks”. He said MEPs who voted to approve the report had been pressured by representatives of a “decadent ideology” that “condemns Hungary for wanting to create a normal world”.