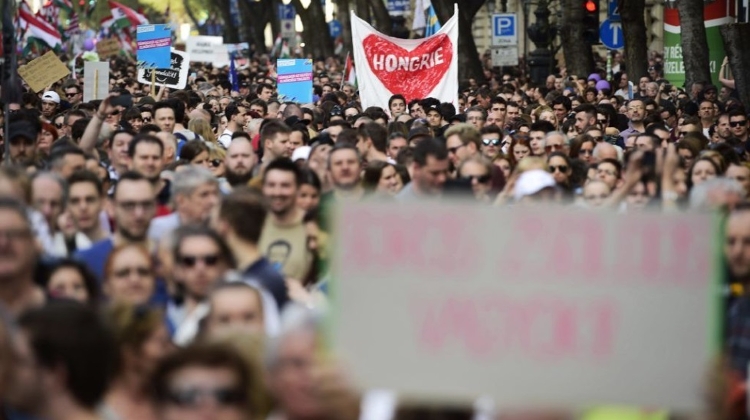 As of Monday Hungary has a new law on the right of assembly which places more restrictions on citizens’ ability to express their dissatisfaction with the state and the government.

The government’s decision to take up the issue of street demonstrations was prompted by several attempts by demonstrators to approach Viktor Orbán’s house to voice their grievances. Only once did they manage to reach the house and exchange a few words with Anikó Lévai, Orbán’s wife.

The demonstrators were dispersed, despite the fact that the law in force at the time didn’t forbid demonstrating in front of politicians’ houses. The organizers appealed, but they lost the case. At that point the constitutional court instructed parliament to harmonize regulations on privacy and freedom of assembly.

So, ever since 2015, we knew that the law would be changed and that the changes would favor the Orbán government, if for no other reason than to put an end to any demonstrations against Viktor Orbán at his own house.

On July 2, 2018, Justice Minister László Trócsányi submitted a draft bill (T/707), which was severely criticized by TASZ (Hungarian Civil Liberties Union) at the time. They pointed out that the original bill of 1989, which was revised in 2004 when Hungary joined the European Union to make it compatible with EU laws, did in fact need clarification on some points.

But, they argued, this government completely revised the bill, which meant the inclusion of some of the pre-2004 specifications, which was a step backward. Altogether the verdict was that the new law includes many features that make it a great deal more restrictive than its predecessor.

The government, however, went full steam ahead. Parliament approved the bill on July 20, less than three weeks later.

The first surprise is that from here on an outside gathering, normally called “demonstráció,” will be called “gyűlés,” whose meaning has absolutely nothing to do with “demonstráció.”

“Gyűlés” means “meeting, deliberation, consultation,” but I guess Fidesz has to have its own private language. Or perhaps they mixed it up with the word “gyülekezés,” which does mean “rally, assembly, assemblage.”

The more plausible explanation is that the word was carefully and deliberately chosen because, after all, one cannot in good conscience call two people discussing politics on the street a demonstration.

Wondering what will happen when somebody mistakenly asks permission to hold a “demonstráció” instead of a “gyűlés.” Permission may well be denied. Knowing Hungarian bureaucracy, that wouldn’t be all surprising. Here, however, the word “demonstration” will be used in order to avoid confusion.

So, what constitutes a “demonstration”? It is any gathering of at least two people in the public sphere for the purpose of a “discussion of public affairs.”

A demonstration is considered to be public if it can be attended by all and sundry. A demonstration must be reported to the police at least 48 hours and no more than 3 months before the event.

Two demonstrations cannot be held in the same place at the same time; the right of assembly will be decided on a first come, first served basis.

This particular passage gives almost unlimited power to the police to move against demonstrations since they always involve some inconvenience to people and their free movement. Who will decide what is “unnecessary and disproportionate”? The police, of course.

A demonstration can be banned if “it interferes with the duties of a foreign diplomat” or “hinders the activities of the courts” or, of all things, “disturbs the ordinary flow of traffic.” If this last restriction is taken seriously, no demonstration can be held anywhere in any larger city.

But that’s not all. The police has the right to ban a demonstration if the place chosen is a location of “a historical memorial of national significance” or “its date reminds people of the victims of the brutal crimes committed under the national socialist or communist dictatorships” because such a gathering “may deny, question, minimize or vindicate the facts of such horrible crimes and thus the demonstration might constitute a disturbance of the peace.”

Against the decision of the police there is no opportunity for appeal, but within three days the organizer can sue the authorities in the “administrative courts,” which the Orbán government just established in order to make sure that these cases or any other where the state authorities are involved don’t end up in the ordinary courts where the judges are more or less independent and in many cases have ruled against the state in the past few years.

The rest of the law deals with organizational rules of demonstrations. Not surprisingly, it is forbidden to take weapons, explosives, and any lethal instruments to the events.

Demonstrators can’t wear military uniforms or clothing resembling military gear, and they cannot cover their faces. These stipulations are an improvement over the previous law. I especially like the banning of masks that certain groups have worn in the past.

Apparently, the specification about naming the organizer responsible for the demonstration is welcomed even by the organizers, although there are a couple of disturbing rules concerning the role of the organizer.

The authorities expect this person to be fully responsible for the peacefulness of the gathering to the point that he is the one who is tasked with removing troublemakers from the crowd.

This level of responsibility seems to be outside the purview of an ordinary civilian. Moreover, in the case of financial loss to a third party, it is quite a burden to place financial responsibility, as this law does, on the official organizer along with the person who caused the financial loss.

What is even more worrisome is the section of the law that stipulates that anyone who disturbs a demonstration can be sentenced to a jail term of at least one year.

That means that those people who made a racket at one of Viktor Orbán’s state demonstrations to express their frustration with Hungary’s little dictator, if they continue this practice, may end up behind bars.

Someone who refuses to follow the instructions of the organizer may face a two-year jail term. Again, imagine a scene where the football hooligans often used by Fidesz organizers rough up some demonstrators, who subsequently will be accused of contravening the authorities.

The final provision is that a demonstration can be organized only in the public sphere; no one can hold a meeting on private property without the permission of the owner. That stipulation sounds perfectly reasonable, but, as someone pointed out, it means that no demonstration can be organized by a trade union in front of a supermarket because the parking lot is the property of the company.

All in all, the rules are written in such a way that the police will find it easy to ban any demonstration. Only time will tell how the law will be applied, but there will be a lot of arguments between organizers and the authorities over the correct interpretation of the law.

Meanwhile the Demokratikus Koalíció, which only recently announced an ambitious but abortive plan for continuous demonstrations, went to the National Police Captaincy and announced a nationwide perpetual demonstration.

What upset DK was that two people discussing politics on the street constitutes a demonstration. As Gergely Arató put it, “such a law can be written only in a dictatorship.” He urged people to protest, demonstrate, organize meetings, debate, and have political conversations. However, given the mood of the public, DK’s advice will not likely be popular.