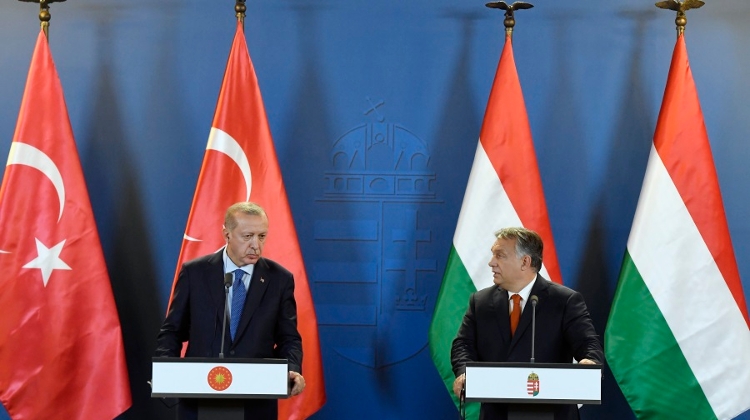 “A stable Turkish government and a stable Turkey are a precondition for Hungary not to be endangered in any way due to overland migration,” Orbán said at a joint press conference after the talks on Monday.

It is Hungary’s interest that Turkey should remain strong and able to maintain peace in its region and control illegal migration to Europe, Orbán said. The Hungarian prime minister expressed appreciation to Turkey for accommodating several million refugees that arrived via neighbouring countries and thanked the Erdoğan for “fully meeting” Turkey’s agreement with the European Union, which he said was another precondition for European security.

Meanwhile, Orbán said that Hungary and Turkey would raise the level of military cooperation and build “powerful ties” in the military industry. He added that in recent decades “there have been no money or energy left to develop the military” but “we will make up for that now; Hungary’s goal is to build a modern and effective national army”.

Concerning business cooperation, Prime Minister Viktor Orbán said that the mutual goal of increasing the turnover of bilateral trade to 5 billion dollars has not yet been reached. He noted, however, a 19 percentage point increase in the first half of this year, and said that meeting the original goal “does not seem unrealistic”.

He also said that Hungary’s Eximbank has set up a pool of 420 million dollars to boost bilateral economic cooperation. Turkish investment in Hungary was also discussed, and Orbán asked Erdoğan to encourage Turkish investors accordingly.

They also discussed opportunities for Hungarian businesses in Turkey, and Orbán highlighted farming and water management as potential areas. Orbán said Hungarian foreign policy must look to three cities: Ankara, Moscow and Berlin, three great powers around which Hungary has revolved for many centuries.

“This is why it is important that ties between Hungary and Turkey are always balanced, orderly and positive, and that the relationship between the two countries is based on respect,” he said.

He said the agreements signed and initialled will allow Hungary to participate in the development of the Turkish economy. On the topic of Turkey’s EU accession, Orbán said that Hungary had always supported Turkey and would continue to do so.

If Europe does indeed decide to become a major global political player, then it must find the right form of cooperation with Turkey, he added. “What we are doing now is dishonest,” he said, referring to EU-Turkey negotiations. He said several negotiating chapters had been opened only to be closed again.

And the EU signals its intention to negotiate while major EU member states declare “we will never take this country into the EU”, he said. Hungary wants a strong Europe, and for this a strategic agreement with Turkey is needed, the prime minister said.

Erdoğan told the press conference that 3.5 million Syrian and another 500,000 Iraqi refugees live in Turkey today. Accordingly, the Turkish government will count on the countries of Europe and outside the continent for help, he added. As regards his talks with Orbán, the Turkish president said cooperation with Hungary would continue to be highly important and called for the further strengthening of bilateral ties.

He praised cooperation as “excellent” in various areas. He noted the next meeting of a bilateral mixed economic committee scheduled for November, focusing on exploring further possibilities in Turkish-Hungarian investment projects outside their regions and in bilateral tourism cooperation.

In terms of bilateral trade, he noted plans to increase volume to 5 billion dollars. In the area of cultural cooperation, Erdogan noted the preservation and renovation of the 16th-century tomb of Gul Baba, a dervish, a poet and soldier sent to Buda in 1541 by Sultan Suleiman. He called the tomb an important symbol of the two countries’ common past.