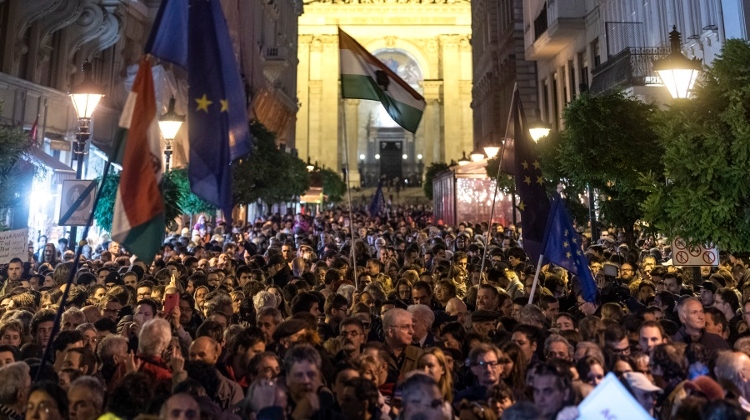 Thousands gathered in central Budapest to express solidarity with Central European University (CEU), in a demonstration staged by the Momentum Movement, on Friday.

Momentum leader András Fekete-Győr told the crowd that the government “wants to expel CEU from Hungary” because Prime Minister Viktor Orbán “is terrified of all those that have thoughts”.

He gave the prime minister until December 1 “to take his dirty, corrupted hands off the university” and called on Hungarians “to defend what belongs to them”. CEU said last week that incoming students will study at a new campus in Vienna from the 2019-20 academic year, if a solution affecting the university’s circumstances cannot be found by December 1.

In response, government spokesman Zoltán Kovács branded the announcement a “political ploy” on the part of US billionaire George Soros. He said CEU “will continue to operate in Hungary today, and, in our opinion, in the future too.” Ruling Fidesz said in a statement that Momentum “promotes the interests of businessman George Soros”.

They argued that politicians of the opposition are backed by the US billionaire and “they are now paying their gratitude in front of the Soros university”. The statement added that CEU “is operating undisturbed” and the “hysteria around it is but a political ploy”.

In another development, the opposition Democratic Coalition (DK) said it would make every possible effort in both the Hungarian and the European parliaments to ensure CEU is allowed to continue operating in Budapest.

Deputy party leader and MEP Péter Niedermüller said resolving the conflict with CEU as well as restoring academic freedom and the autonomy of universities is a basic condition for ruling Fidesz to remain in the European People’s Party. DK will initiate a plenary vote on putting a bill on lawmakers’ agenda that would renew CEU’s licence automatically, Niedermüller said.

Getting Hungary’s government to disclose why it won’t sign CEU’s operating licence and why it wants to bring the university to ruin is a goal that must be achieved, he added.