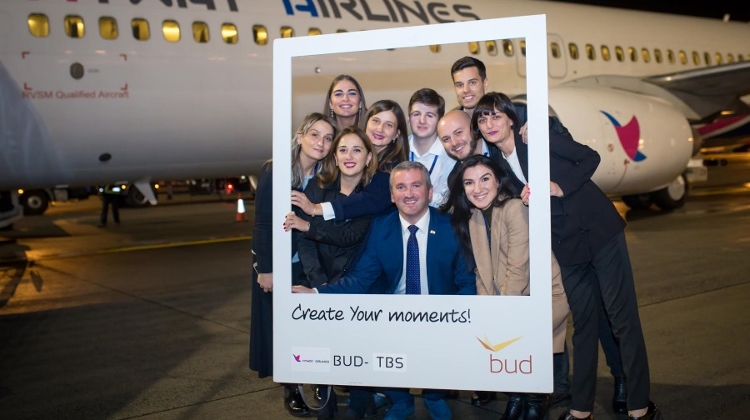 One of the new features of the winter schedule is that as of Sunday evening, a direct aerial connection has been established between the Hungarian and the Georgian capitals. The new Georgian carrier MyWay has made Budapest one of its first foreign destinations.

The first flight to Budapest by MyWay Airlines touched down on the concrete at Ferenc Liszt International Airport on Sunday evening.

The Georgian carrier is a newcomer in the aviation sector of Georgia and the Caucasian region; it commenced operation with a fleet of two aircraft, American-manufactured Boeing 737-800s, with 8 business and 162 economy class seats.

The airline operates according to the full service model, e.g. a piece of hold baggage and on-board catering are included in the fare, its meals complemented with quality Georgian wines.

During the first three weeks, the flight will commute twice a week, on Thursdays and Sundays, with a third service added on Tuesdays, from 20 November. All flights depart from Shota Rustaveli Tbilisi International Airport in the late afternoon, at 18:10, and arrive in Budapest at 18:40.

The aircraft then take off at 19:40, with a turnaround time of one hour, and land in the Georgian capital following a flight time of about four hours, at 01:50 in the early morning the next day.

(During the winter schedule, the time difference between Hungary and Georgia is three hours.) MyWay is represented in Hungary by CEAS-Central European Aviation Solutions Kft., as of October 2018.

Georgia is an exciting destination for tourists, whilst the peaks and untouched forests of the Caucasus provide unforgettable experiences for nature-lovers, mountain-climbers and hunters.

The Georgian kitchen is deservedly famous beyond the region as well, with its diversity, delicious salads, special green spices and grilled meat dishes. The country is seeking closer business relations with the members of the European Union; the new flight also serves this purpose well.

“Budapest Airport is delighted to welcome yet another new airline to the market. Having a flight connection for the very first time between these two great cities is a fantastic endorsement of the opportunities which exist for leisure and business travelers between Hungary and Georgia. We wish MyWay airlines a very successful flight launch, just in time for the upcoming ski season,” said Kam Jandu, the chief commercial officer of Budapest Airport.

It is noteworthy that MyWay caters specifically for the needs of skiers, as one piece of skiing equipment can be transported free of charge on board the Tbilisi flight.

The Gudauri ski resort is located just 120 kilometers from the Georgian capital; its highest point is 3276 meters and it offers more than 32 km of excellent ski slopes.