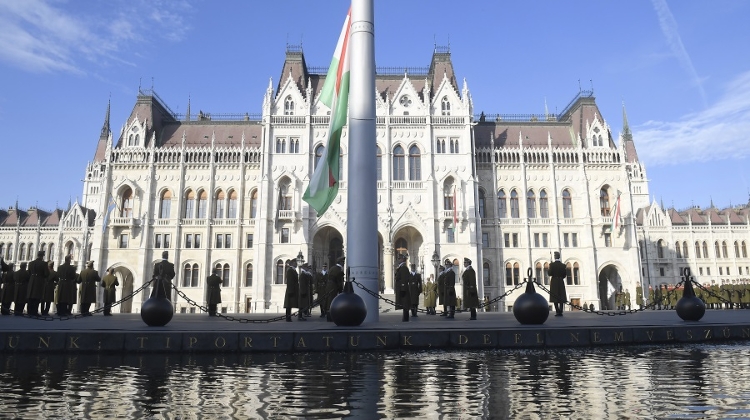 Hungary’s flag was raised and then lowered to half-mast with military honours in front of Parliament on Sunday to mark the 62nd anniversary of the crushing of the 1956 revolution and freedom-fight.

The heroes and martyrs of 1956 must be remembered and thought of with gratitude, the minister said in the cemetery’s national park of mourning. “1956 spoke to the conscience of Europe and the world,” Trócsányi said.

“Nothing has moved the conscience of the free world like the Hungarian revolution.” “October 23, 1956 was borne out of hope, and this is what was killed on November 4,” the minister said.

During this period, Hungarians lived in greater fear and hopelessness than in 1945, he said. On October 23, the “nightmare” came true and many Hungarians were forced into hiding or had to flee, Trócsányi added.

“An entire generation disappeared, among them many talented people.” Quoting Hungary’s constitution, Trócsányi said Hungary’s freedom was rooted in the 1956 revolution. He added, at the same time, that freedom was “not an accomplished fact but rather a process”.

The minister later attended the unveiling of a memorial plaque honouring Jenő Fónay, a 1956 freedom fighter and founder of the National Alliance of Hungarian Political Prisoners (Pofosz). Trócsányi praised Fónay, noting that he was sentenced to death twice in 1956, but was pardoned just as he was about to be executed.

He said Fónay had gone on to play a “historic role” in the period of Hungary’s transition to democracy by founding Pofosz and helping to organise the reburial of martyred Prime Minister Imre Nagy in 1989. Fónay was deputy commander of a resistance group based at Budapest’s Széna Square during the revolution.

He died in 2017. Finance Minister Mihály Varga also marked the national day of mourning at a commemoration event in Budapest’s 2nd district, saying that Hungary was a free and independent country today thanks to the struggles of the heroes of 1956. The freedom fighters wanted a Hungary that was independent of empires, could stand up for itself and was free to decide its own fate, Varga said.

“We must believe in the Hungarian nation and look towards the tasks of the future with a healthy self-confidence,” he said.

“This is the self-confidence that those who believe we shouldn’t make our own decisions want to tear down. For us, Hungarians and Hungary’s interests come first,” Varga said.