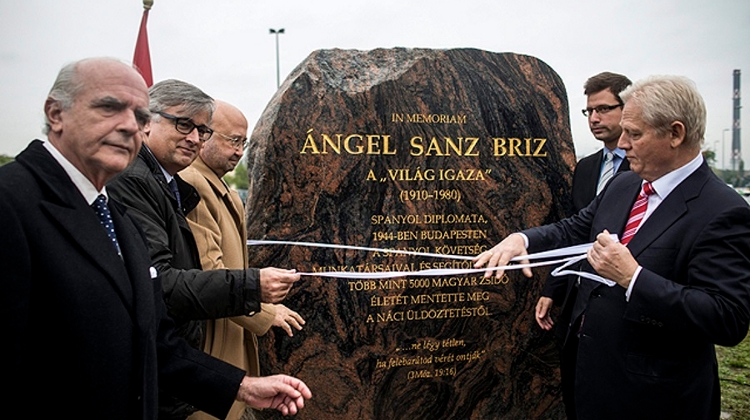 Every autumn the Embassy of the Kingdom of Spain organizes an event to commemorate the victims of the Holocaust in Hungary.

They are paying their tribute to the victims and their families, as well as to the brave men and women who stood up for them, saving lives of thousands of Hungarians persecuted by the Nazi regime.

Many names come to our minds, some of them diplomats who have used their position and privileges to extend a helping hand to those in need.

Among them, a young Spaniard, Ángel Sanz Briz who was recognized with the title ‘Righteous among the Nations’ by the Jerusalem Yad VaShem Institute on 18 October 1966. His efforts have been recognized by the Budapest City Council in 2015, when they dedicated a street to his memory in the 3rd district of the Hungarian capital.

In the inauguration ceremony, in the presence of a large representation of the Sanz Briz family, the Mayor of Budapest, István Tarlós and the Spanish State Secretary, Ignacio Ybáñez have together unveiled a Monument at the beginning of the street.

Since then, we return there every year to celebrate a humble event in memory of the lost lives, the heroic efforts of the saviours and to hear the testimonials of the survivors.

This year, instead of flowers or wreaths that wither with time, we begin a new tradition, planting a tree next to the monument that we hope to repeat in the upcoming years and turn the corner into welcoming woods that celebrates life, and creates a cozy space around the monument.