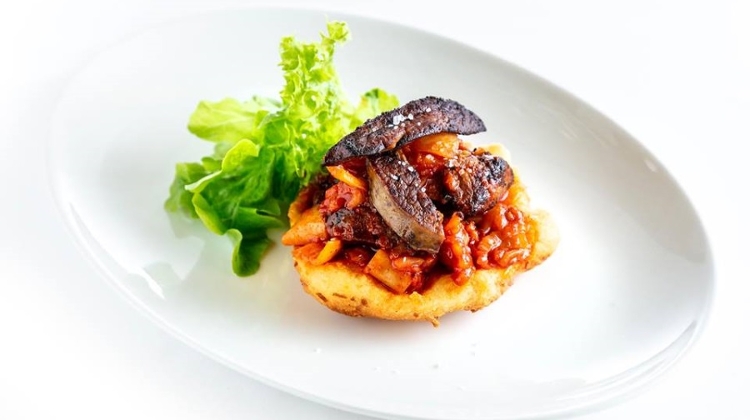 Running a swish restaurant in Budapest in the midst of a tourism boom might seem like good business. Throw in the palatial environs of a listed, fin-de-siècle building on downtown Ferenciek tere, and surely, success is guaranteed? If only it were that simple, says the boss.

Ákos Niklai sits in one of his smaller dining rooms, surrounded by paneled walls adorned with classical artwork – each depicting a historical Magyar hero (if not always in a historical way) defending the homeland against a foreign oppressor.

“Hungary was occupied by the Turks, but I have to be careful when we have Turkish guests here. I should say occupied by the Ottomans, [although] someone has to explain to me the difference between the two,” he says, mindful of a Turkish student in his audience.

“Actually, we have many Turkish groups as well. They don’t mind the whole story of Hungary. Guests like it when we talk about the history.”

Niklai, a veteran of the Hungarian hospitality sector, has managed the Kárpátia restaurant for 20 years, having bought the management rights in the heady 1990s decade of privatization sell-offs.

On this November day, he is being quizzed by foreign journalism students on the challenges of running a classical eatery in the heady days of a tourism boom.

This fine-dining thing is all well and good, but with the cut-throat competition from internationally branded, fast-food outlets, is your model not outdated, one sceptic enquires?

“Fast food, it might be a challenge at lunchtime, [but] I don’t think it’s competition. There is a change in trends, no question, particularly for the young generation. But sometimes, when you guys are getting older, then you might like to come to a more traditional restaurant with your families, being served. In other words being served, not just queuing up in a McDonald’s for 25 minutes,” Niklai retorts.

Whatever, after a critical period in 2009 when the global crisis almost brought the operation to its knees, it is now profitable, particularly the main hall, where up to 120 guests can dine in gilded splendor each evening.

Accompanied by a five-piece gypsy band, and attended by long-serving staff, it is a Central European cultural-culinary experience; indeed, the antithesis of brash, Americana burger and fries.

Such attention, together with traditional Magyar drinks and dishes, commands a price: the average tab per head at dinner is some HUF 11,000, a sum beyond the daily reach of most locals, but, as a one student noted, a bargain compared to a similar product in France.

Yet class dining, even in Budapest, is also a high-cost business: with 40 full-time staff (ranging from dishwashers to a butcher), maintaining a positive bottom line at the Kárpátia is a complex, constant battle.

Some of the challenges – such as the near impossibility of finding new, skilled staff, and ever rising wages – are common to all forms of hospitality. Others are special to running a restaurant which has “hardly changed for 100 years”.

“This is a very old restaurant, built according to the needs of the 19th century. At that time, nobody considered productivity, things like that,” says Niklai. And while its protected status is the basis for much “old world charm”, it also prohibits fitting air-conditioning equipment - a significant drawback on roasting summer days, only partially countered by renting terraces in the street and neighboring courtyard.

Given its clientele, social media is also more of a two-edged sword for Niklai than modern eateries – older customers are less likely to rush to Facebook or TripAdvisor than youth to boast of an “awesome” evening, but are equally willing to voice complaints. This can result in a somewhat unfairly skewed set of customer reviews, he laments.

For the most part, however, Niklai appears to be quietly satisfied with his two-decade reign over this national treasure. He is especially grateful to his 300 or so core customers, many of whom are lunchtime regulars.

Asked to declare his greatest challenge, the response is immediate: “People! People management. I’m experienced in this field, but still, every day, I think about 20% of my time I spend with employees [.…] one has to learn to listen, to motivate, just to look at them.”

The effort appears to pay off. “I think 80% of the waiters have been here since day one. This is a great asset: you cannot get waiters, or chefs [today]. Even in the kitchen, on average, people have been working here for more than ten years,” he says. “So maybe there is something I’m doing well.”

For 364 nights each year – Christmas Eve is their only day off – Lajos Sárközi and his band play their mix of folk, classical and traditional Roma melodies at the Kárpátia. “There are many talented Gypsy musicians.

Twenty years ago most restaurants had them,” says restaurant manager Ákos Niklai. But with changing tastes, and cheaper, recorded music on hand, numbers have dwindled. The Kárpátia, however, has persevered with tradition. “It was a good decision [to keep them],” he says, “they contribute to the old-world charm.”