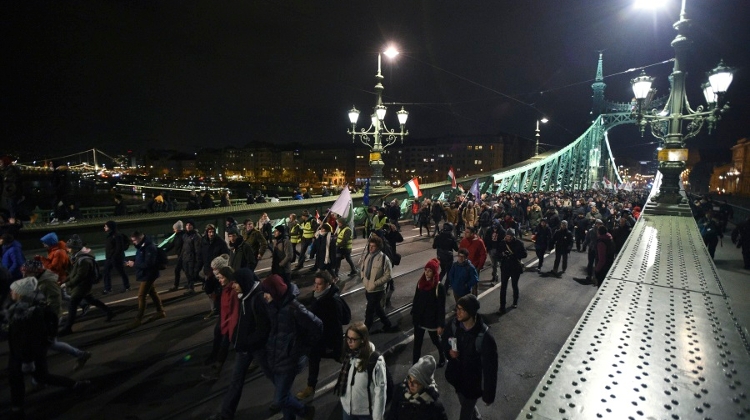 Interpreting Wednesday’s street disturbances after the vote on the Overtime Bill, pro-government commentators accuse the opposition of violating democratic norms, while a left-wing and a liberal columnist think that extra-Parliamentary action is necessary for the opposition to challenge the government.

The opposition claimed that what they have dubbed the ‘slave bill’ would enable employees to force workers to work even more hours than they do at the moment, without the guarantee that they will even be paid for their efforts (according to the law, overtime will be calculated over 3 years, instead of the current 1).

The government claims that the new law offers employees the option to work and earn more, but there will be no compulsion. Opposition MPs tried to block the vote in Parliament by occupying the floor and blocking the stairs up to the speaker’s seat. After the vote, protesters blocked traffic in downtown Budapest.

On the steps of Parliament, police faced by a barrage of projectiles used tear gas and pepper spray. Five policemen were reported to have suffered minor injuries. 34 demonstrators were detained.

In Magyar Idők, Gábor Bencsik accuses the opposition of unscrupulous political opportunism. The pro-government pundit claims that opposition MPs spread lies to mobilize their supporters. Bencsik emphasises his point that, despite provocations by opposition demonstrators, the authorities did not respond with violence.

Magyar Hírlap’s Károly Bán finds it peculiar that after criticizing the government for its harsh measures towards multinational companies, the opposition now accuses it of selling out Hungarian workers’ interests to business considerations.

The pro-government columnist believes that as the opposition is unable to win elections, it is trying to return to power by fomenting revolution.

In Pesti Srácok, Tamás Pilhál accuses opposition MPs of using force to shut down Parliament. The pro-government commentator goes so far as to suggest that the Parliamentary entry cards of opposition members should be taken away, and opposition MPs should be ‘sent for five years of public work’.

In Mérce, Zoltán Gábor Szűcs praises the opposition’s efforts, and cites US President Jefferson’s statement: ‘The tree of liberty must be refreshed from time to time with the blood of patriots and tyrants’.

The left-wing political scientist finds it reassuring that the opposition has finally acted in line with the principles of ‘honesty, integrity and credibility’. Szűcs calls on the opposition to fight what he calls the undemocratic government even with little chance of success.

Heti Világgazdaság’s Tamás Gomperz speculates that without using extraordinary means, the opposition has no chance of ousting Fidesz from power. The liberal pundit thinks that the Orbán government cannot be replaced through democratic means, and thus the opposition has no choice but to rely on acts that may not be in conformity with the law.