Local Opinion: Weeklies On The Anti-Government Demonstrations In Hungary 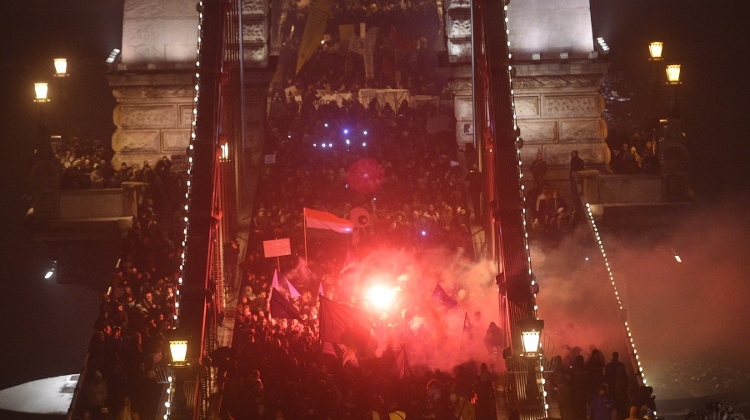 While the two bills that sparked passionate anti-government demonstrations were signed into law by President Áder who then became the target of this year’s last protest rally, nationwide weeklies try to put the December protest into perspective.

It its last editorial of the year, Figyelő calls on the government not to retreat in the face of demonstrations at home and criticism from abroad.

The incumbent government, the editors write, has produced unprecedented economic growth and records levels of employment. By contrast, they continue, the opposition which is now staging angry rallies led the country to ruin 10 years ago  and have no programme no proposals, no aims to reach, nothing but a pathetic stance.

Figyelő describes the Sargentini report adopted by the European Parliament as a declaration of war on the government and Hungary. The country must defend itself against those attacks at the forthcoming European Parliamentary elections, they conclude.

The editors of Magyar Narancs , on the other hand, welcome the December protests as the expression of a new opposition in the making.

Sure, the protesters couldn’t prevent the two laws they objected to from being enacted, the editors admit, but argue that they have nevertheless not failed. They would only fail if they stopped resisting the government.

Magyar Narancs finds it particularly telling that two Jobbik MPs climbed over the fence of the public media headquarters to take food to their left-wing colleagues who were protesting inside.

Hungary has now a new opposition and a promisingly young group of citizens ‘has been showing for a week what has to be done when their homeland is taken hostage by criminals’, the editors of the liberal weekly write.

In Hetek, György Király suggests that the latest events have forced Fidesz to change its successful traditional attitude. It was born, and it developed in fact as an opposition party and continued to behave like one even when in government.

It framed its policies in opposition to the IMF first, then to Brussels and managed to recruit new followers by doing so, especially in its campaign against illegal immigration.

Meanwhile, the governing forces also behaved if they were the opposition of the opposition because the latter supported Fidesz’s critics within the European Union. They then reacted to demonstrations in December condemning the protesters and questioning the legality of their actions, which is a departure from the traditional Fidesz attitude and is typical government rhetoric.

Király also remarks meanwhile, that the police have been much more professional in facing this year’s demonstrations than it had 12 years ago when right-wing protesters were demonstrating against a left liberal government.

In Magyar Demokrata, Gábor Bencsik dismisses opposition hopes that the demonstrations might lead to the fall of the government, as protests in 2006 eventually did.

He recalls that at the time, the right wing was united and strong why the left was falling apart.

In addition, police brutality made the left liberal government even more unpopular, while today the police have been patient and moderate. 12 years ago, he continues, the country was heading for economic bankruptcy, while this time all macroeconomic indicators have been improving for years.

Meanwhile the so-called new opposition that has been demonstrating consists of people dissatisfied with the government for very divergent reasons.

There are among them liberals and nationalists; those nostalgic of the Kádár era; anti-Semites and filo-Semites; Gypsy activists and racists; extreme left-wingers and radical right-wingers. One day, Bencsik admits, Fidesz will be voted out of power, but the man and the political movement that will be able to defeat it have not even entered the political stage so far.

In Heti Világgazdaság, András Hont admits that today’s opposition will never be able to grab power democratically because it lacks the necessary competence.

When the right wing lost the second election in a row in 2006, he explains, its defeated camp did have a leader who knew what he wanted and who could count on a group of colleagues who had entered politics with the regime change 16 years earlier.

By contrast, today’s opposition can hardly show politicians whether life story that will qualify them to become leaders. Nor is the e size of the recent demonstrations significant.

The crowds we have seen the December are a fraction of the ones in April, before the elections. What is new, Hont suggests, is the radicalism of the demonstrators who put in doubt the legitimacy of the regime.

He sharply criticises left-wing politicians who first jumped on the bandwagon of the demonstrations but soon reverted to traditional tactics of petty alliances in view of the mayoral elections next year stop he cautions them against breaking the promise not to give up street demonstrations.

Thousands Protest Against Orban’s Government In Budapest, Vow To Make 2019 ‘Year Of Resistance’