Thousands Protest Against Orban’s Government In Budapest, Vow To Make 2019 ‘Year Of Resistance’ 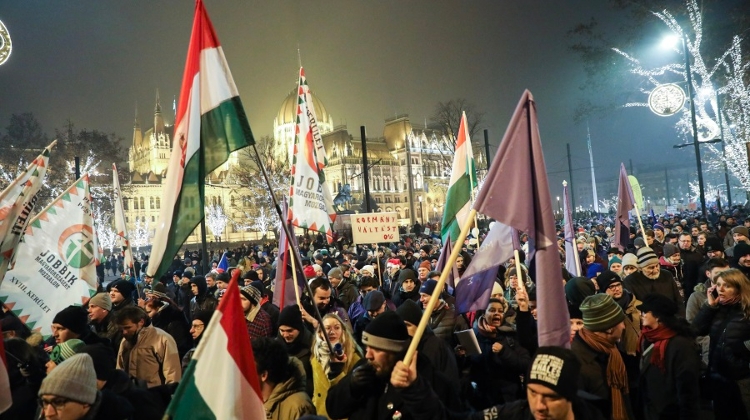 The demonstration started at 6 in the evening at the Parliament and ended with thousands walking up the castle hill in Buda to protest in front of President János Áder’s office.

Demonstrators were mostly peaceful, and police did not use tear gas this time. Organizers promised to continue protests after the holidays and discussions about a general strike have started.

After the tumultuous events of last weekend and Monday, Budapest’s streets were quiet during the middle of the week. However, protests continued across the country; demonstrations were organized in dozens of towns.

There were demonstrations in Eger, Kecskemét or Szombathely, for example. Some were attended by more than a thousand people. This is a significant development: it is very rare that the entire country joins Budapest in protests.

Friday night another big rally was held in Budapest. This latest night of long demonstration started near the Parliament at 6 o’clock with the ’Peace March’ organized by the Two-Tailed Dog Party (Magyar Kétfarkú Kutyapárt, MKKP).

Hungary’s ’joke party’ made fun of the Orban government – their speakers, for example, thanked the government for allowing people to work for 8 days a week. This obviously referred to the so-called ’slave law’ that allows employers to ask (and, according to critics, pressure) people to work six days a week. Others demanded ’more stadiums’ – referring to Orban’s passion for soccer and the numerous stadiums built across the country.

From 8 o’clock more protesters started to gather at Parliament for a march to President János Áder’s office. This week Áder signed both the ’slave law’ and the law creating the administrative court system (criticized for allowing the government control over key decisions on corruption and issues related to politics). The demonstration was titled ’Shame on you, János.’

Speaker in front of Áder’s office on the castle hill also stressed the importance of the fact that opposition parties, after being divided for long years, are now willing to cooperate.

The issues raised at the protest were again wider than the ’slave law.’ Protesters and speakers talked about academic freedom, the independence of the judiciary and the need for an unbiased public service media as well.

The protest Friday night was generally peaceful. After the long line of speeches, after 11 pm, most of the protesters left the castle hill. A few dozen people remained to chant slogans; some threw toilet papers at the president’s office. One person was detained by police for throwing a smoke-screen bomb at the presidential palace.

There was a heavy police presence but demonstrators did not try to push through the police, there were few tense moments between the rows of police and demonstrators. Tear gas was not used by police this time; police had been criticized for using tear gas too liberally on protesters during the events of last weekend.

Organizers vowed to continue the protests next year. Anna Donáth, vice president of the Momentum party declared 2019 the ’Year of Resistance’ while other speakers called for a general strike.