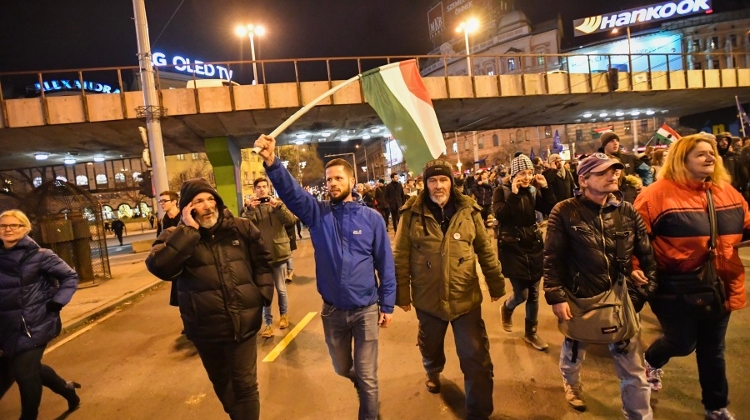 Some hours ago, at 11:30 p.m. Budapest time, the police used tear gas against the thousands of demonstrators on Kossuth Square. At the moment we have no idea what the consequences of Wednesday's events in parliament and on the streets will be.

The confidence exhibited by Fidesz members of parliament, including Viktor Orbán, may evaporate after some reflection on the fallout over the scandalous way the government party pushed through a series of laws, including the most objectionable modifications of the labor law.

The first question we ought to ask is why the government brought this issue to the floor with such a sense of urgency. It was just a little over two and a half weeks ago that Lajos Kósa and Kristóf Szatmáry submitted their proposal to raise the number of hours an employee might be asked to work overtime from 250 to 400 a year. Now the bill, pending President János Áder’s approval, is the law of the land. Why the hurry?

Many have suspected all along that pressure from multinational companies with factories in Hungary prompted this legislative change. But, as we learned from Foreign Minister Péter Szijjártó, German manufacturers in particular had made many such requests earlier.

It seems, however, that Viktor Orbán, sensing the extreme unpopularity of such a move, had consistently resisted this pressure. What happened in the last few months that brought this issue to the foreground?

Ferenc Gyurcsány, in an interview today, sketched out a scenario that sounds plausible. It was at the end of July that BMW’s decision to establish a new plant in Debrecen instead of Košice/Kassa, Slovakia became public. BMW will invest €1 billion in this new plant, which will employ over 1,000 people. BMW hopes to produce 150,000 vehicles–gasoline, hybrid, and electric–a year at this new facility.

The official reason for choosing Debrecen over Košice was its superior infrastructure, which is in fact the case, but Gyurcsány and others suspect that during the bidding war the Hungarian government promised, in addition to all sorts of other incentives, to raise the amount of overtime manufacturers could demand in order to ensure uninterrupted production.

During the parliamentary pandemonium Fidesz politicians didn’t seem to be the least bit frightened. They probably didn’t anticipate any public reaction. A few days ago there was a similar scene in parliament, but other than a joint statement by the opposition parties nothing happened. But then reality set in.

An originally small demonstration in front of the parliament building, which looked like so many others that had led nowhere, began to grow thanks to a clever tactic employed by the young Bence Tordai (Párbeszéd), who somehow instinctively sensed that “a little walk” in the city would bring new demonstrators to the fold.

Over the course of the afternoon and early evening, the demonstrators went to the Fidesz headquarters at the corner of Lendvay and Dózsa György Streets, to Oktogon, and then back to Kossuth Square. Armored personnel carriers of TEK (Terrorelhárítási Központ) were ordered downtown, allegedly because of the heightened terrorist threat at the Christmas fair.

The police “defending” the parliament building put helmets on as they were pushed against the wall behind them. It was reported that eventually police used pepper spray and tear gas to get rid of the fairly large crowd that was still there close to midnight.

Never in his worst nightmares did Viktor Orbán expect anything like this demonstration, because otherwise he would have thought twice before agreeing to the German manufacturers’ demands.

The crowd didn’t demonstrate only because of the overtime scandal but because of countless other grievances. What is especially bad news for the Orbán government is that so many of the demonstrators were young people who demanded a free country and a free university and who called themselves hirelings of George Soros.

Shortly after the tumult in parliament, László Kövér was still contending that the action he had taken was perfectly legal and that those who “tried to stage a parliamentary coup” would be severely punished.

We will see whether Thursday morning, after an assessment of the damage these few days have done to the government party, he will still be ready to send some of his fellow legislators to jail, as he threatened. We will also see whether demonstrators will appear on the streets again–whether this time is really different.