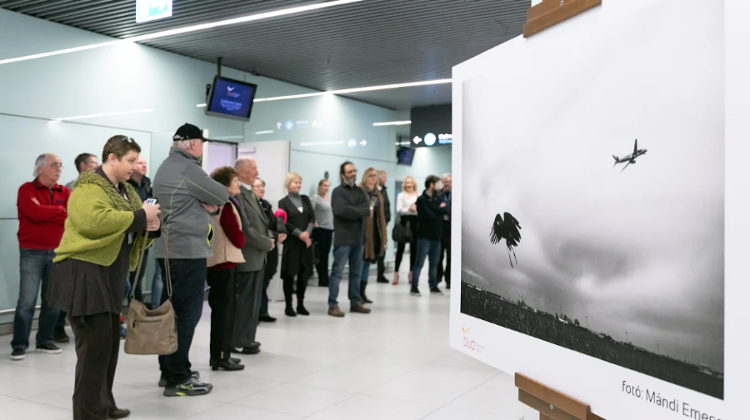 Now on until 19 March. The latest exhibition in the ‘BUD gallery’ series was opened at Ferenc Liszt International Airport, featuring pictures of the airport by Emese Mándi, a young Hungarian photographer. The 24 photos (arranged in pairs) – an artistic presentation of life at the airport – are on display on the arrival level at Budapest Airport.

The very best of no less than five years of airport photography can be viewed for three months in the BUD Gallery of Ferenc Liszt International Airport, where 24 photos by Mándi Emese are on display now.

Emese Mándi started to compile her set of airport art photos in 2013, for which technical support was provided by Budapest Airport. It is partly due to these pictures that the young photographer was admitted as a full member of the artistic photography section of the National Association of Hungarian Creative Artists.

After getting two university degrees, Emese Mándi entered the world of photography initially as an event- and wedding photographer. She won a prize with her pictures for the first time in 2008 at the photo competition of Panasonic Lumix (in the category of rendering people’s images), and in 2009 she won the first prize in the National Geographic competition in the category of “Travel and cultures”.

Subsequently, she worked for the rock band Omega as a stage photographer, and she is the official photographer of the folk band Csík since 2013. Her very first public exhibition has just been opened at Ferenc Liszt International Airport.

“Budapest Airport is happy and proud to offer publicity to talented young artists like Emese Mándi.

After an initial interest, the smell of kerosene got to her too – she discovered the exciting, always changing world of aviation intuitively, and now presents her artistic impressions playfully, with humor,” said Mihály Hardy, communications director of Budapest Airport.