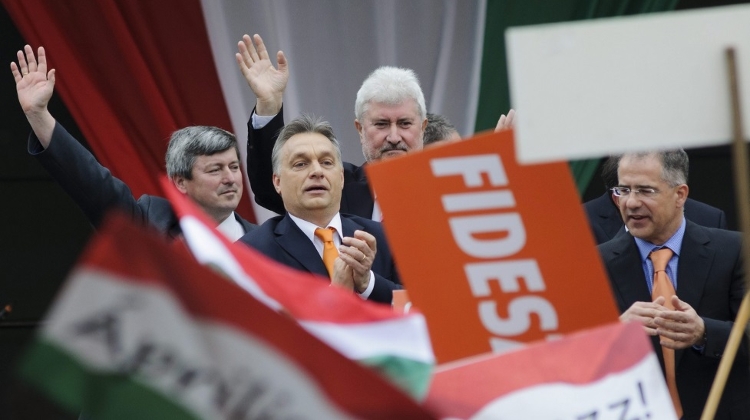 A new representative poll by the Závecz Research Institute (ZRI) shows that support for the governing national-conservative party Fidesz is falling due to the unpopularity of the so-called "slave law" and opposition action.

While Fidesz stood at 35% among the entire adult population at the beginning of last December, it now has the support of 32%, the poll says. This means that Fidesz lost approximately 250,000 supporters. While this is a significant amount, the governing party is still miles ahead of the fragmented opposition.

According to the research, the governing partyʼs popularity is down 5% among active workers, 5% among those with vocational education, 7% among those under 40 years of age, and also down 7% among the college educated.

In contrast, Fideszʼs support remained either unchanged or even grew by 1-2% among its strongest groups: the elderly and the poorly educated.

In Budapest, the partyʼs popularity fell by 9%, and it was down by 5% in county capitals, and 4% in villages. Changes in small- and mid-sized towns were insignificant.

The activity level of government supporters is higher than last month, meaning that those who left the Fidesz camp were not among the staunchest of supporters.

Among the opposition, Jobbikʼs popularity rose by 2%, to 11%, while MSZP (Socialist Party) and DK (Democratic Coalition) failed to improve their results of 7% and 5%, respectively. Support for Momentum is up 1%, at 4%, just below the parliamentary threshold.

The support of the satirical Two Tailed Dog Party is also up 1%, now at 3%. LMPʼs support stagnated at 3%. The support of Párbeszéd stands at a mere 1%, as it does for the Mi Hazánk (Our Home) movement, a right-wing radical organization that recently splintered from Jobbik. The number of undecided adults is roughly the same as Fidesz supporters, representing 32%.

Among those who are certain in their vote, Fidesz stands at 48%, Jobbik at 17%, MSZP at 12%, DK at 8%, and Momentum at 5%, just above the parliamentary threshold. Those who are currently below the threshold among confirmed voters are LMP (4%), Párbeszéd (2%), and Mi Hazánk (1%).

The poll was conducted between January 4 and 11, with a representative sample size of 1,000 people above the age of 18. The whole research is available here, in Hungarian.