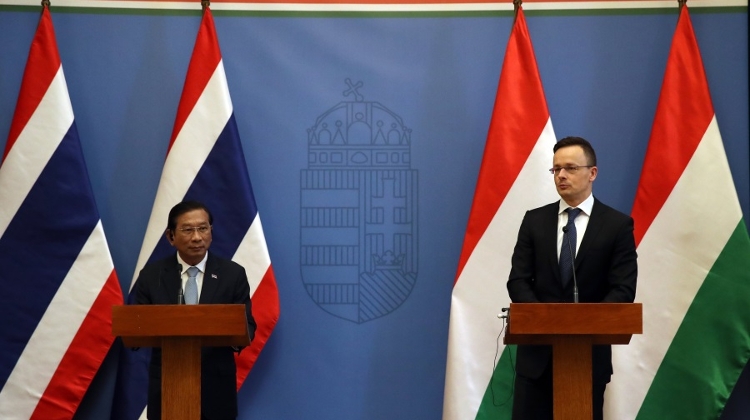 Given that Thailand has the largest economy in its region, it is in Hungary’s interest to intensify cooperation with the Southeast Asian country, Foreign Minister Péter Szijjártó said in Budapest at a joint press conference after talks with General Chatchai Sarikulya, Thailand’s deputy prime minister.

Szijjártó noted that Thailand is Hungary’s number one Southeast Asian trading partner. Thailand is a huge market where Hungarian companies have been successful in the past, the minister said, adding that Hungary intends to tighten bilateral economic relations.

To promote bilateral economic ties, Hungary’s Eximbank will open a 630 million dollar credit line, he said, adding that a session of the Hungarian-Thai mixed economic committee has also been convened.

With the European Union having lifted its restrictions concerning Thai air carriers, Hungary and Thailand have begun talks on launching a direct flight between the two countries, Szijjártó said.

In addition, talks are under way on Hungarian participation in Thailand’s air traffic control, he said.

The minister named water management as one of the main subjects of his talks with Sarikulya. Thailand has approved a 10-year strategy for modernising its drinking water distribution and flood protection systems and the construction of wastewater treatment plants, he said.

Szijjártó voiced Hungary’s support for restarting free trade talks between the EU and Thailand, saying that the fewer obstacles there are to international trade, the better it is for Hungary and Hungarian companies.

Sarikulya said the main goal of his visit to Budapest was to find out as much as possible about Hungary’s water management solutions, as it is one of the areas that present opportunities for mutually beneficial cooperation between the two countries.

He also said Thailand could serve as a gateway to East Asia for Hungary, just as Hungary could be a gateway to Europe for Thailand. The deputy PM thanked Hungary for having granted scholarships to 28 Thai university students.