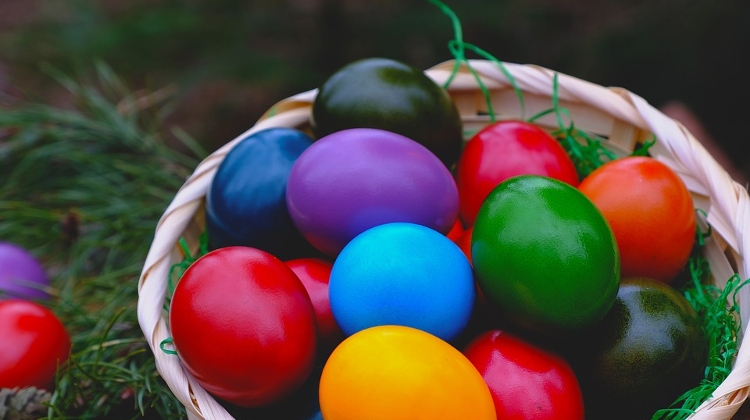 Local Easter eggs are decorated with simple geometric shapes or ornamented with swirls of plants and flowers. Ancient symbols sometimes feature too: the wheel of the sun, or the cockscomb, for example.

Within the Christian tradition, the custom of dyeing eggs red goes back a thousand years. Red symbolizes the blood of Christ; the egg, eternal life. Other colors began to be used only three hundred years ago.

The colorful flowers that adorn so many eggs echo the embroidery on Hungarian national costume.

The decoration of Easter eggs is a Hungarian craft in its own right - as you can see in the video below.

Wax-resist dyeing is the most popular method: The pattern is painted onto the shell using a quill dipped in molten wax.

The egg is dyed, and then warmed slightly to melt off the wax, so that the white, undyed pattern appears.

Engraving, an alternative method, requires the egg to be dyed first. The pattern is then engraved on with a knife. According to how deeply the surface is scratched, a deeper or paler color is revealed.

A simple but effective method is to boil onion skins in water; boiling the eggs in this gives them a lovely dark brown color. They are then rubbed with bacon rind skin to give them a sheen.

Pretty, natural patterns in a paler color can be obtained by sticking leaves onto the shells of the eggs before they are boiled. Once the eggs are dyed, the leaves are removed.

Another traditional technique is to decorate blown eggs with tiny metal horseshoes. This requires some dexterity, so is done only by trained craftsmen. The first chocolate eggs arrived on the market at the beginning of the 19th century.

The confectioners decorated these eggs lavishly; some creations featured in the local press. One such was a chocolate egg with the picture – likewise executed in chocolate – of the chain bridge then under construction. Built between 1842 and 1849, this was the first fixed bridge over the Danube uniting Buda and Pest.

What About Easter Rabbit?

The Easter rabbit has rather more recent origins; it probably did not reach Hungary until the 20th century. It comes from a German cultural background, and is first mentioned at the end of the 17th century.

Unlike the other Easter customs, which are rural in origin, the Easter bunny spread from the town outward.

Two of the most common folk customs are sprinkling and egg-painting, and the two go hand in hand. Easter Monday is a very busy day, so everyone gets up early; girls and women dress up in traditional costumes and they are waiting for the boys and men who – armed with a bucket of water – go from door to door, visiting female relatives, friends and acquaintances.

Women are considered flowers, who will wither without the yearly proper sprinkling; in the old times people used to believe in the cleaning and fertility effect of the water. Men politely ask the women if they can sprinkle them in the form of a “sprinkle poem”, and if they get a yes, they pour the bucket of water on them. It’s even more fun if the water is cold, and girls are screaming.

Younger girls often have a friendly competition on who gets the most sprinklers. The payment that the men get for the sprinkling is painted eggs -which woman prepare for days before Easter-, candy, and sometimes money.

Men are also offered alcoholic beverages at almost every house, so it’s not uncommon for them to get quite drunk as the day goes by.

It’s said to be a shame if a girl is not ready when the first sprinklers arrive, and it is also a shame if she doesn’t have enough painted eggs for her visitors.

Nowadays – especially in urban areas – women wear casual clothes for this occasion, and men sprinkle perfume or cologne in women’s hair. The result is that most women have about 40 different scents in their hair by the end of the day. In urban areas the tradition of painted eggs is slowly dying.

Those who paint eggs use paint powder and simply boil the eggs in it, or they buy wooden or some other type of pre-painted eggs. Chocolate eggs are also getting more and more acceptable.

Although sprinkling itself goes out of fashion in big cities, one thing hasn’t changed: those men who visit their female relatives, still have to say a sprinkle poem.

Men often search for days to find the funniest -or in some cases the most suggestive- poems, some are even writing their own poems. This is a great chance to get creative. This can lead to a fun competition between men too: whose poem makes women laugh the most.

A few examples of sprinkle poems in a more traditional style:

I’m waiting patiently in front of your door

I’m waiting patiently in front of your door,
Painted eggs are what I’m asking for,
They better be big and they better be red,
Or I’m taking away your daughter instead!

Wandering through the woods nearby

Wandering through the woods nearby,
A lonely daisy caught my eye.
Without rain she seemed to wither,
So I’d thought I’d bring my sprinkler.

Fairest flower, rise from your pillows

Fairest flower, rise from your pillows,
Look how beautifully green are the meadows!
I’ll sprinkle you with dew from the clouds,
I’ll take as many eggs as my bag allows.

I bid you good morning, You blossoming flower

I bid you good morning,
You blossoming flower,
I’ll sprinkle with rose-water,
So you will not wither.

I wandered through forests
Saw flowers by a dozen,
I flew to you in haste in
A sheep hauled quaking wagon.

Here’s the rose-water,
My lily of the valley,
Give me all your red, red eggs
As much as I can carry.