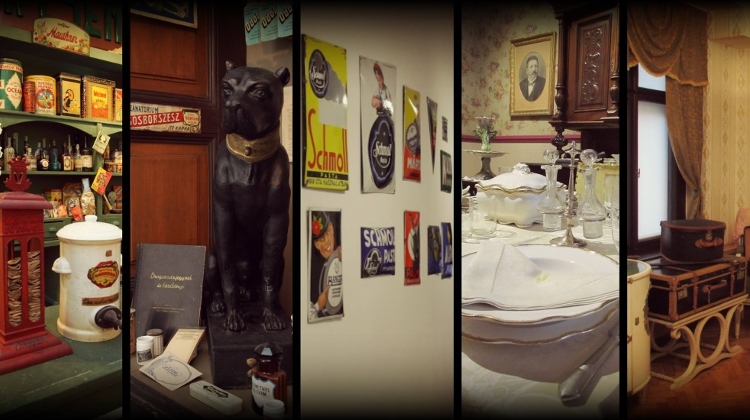 The foundation of the Hungarian Museum of Trade and Tourism was preceded by a lot of experimenting. The museum, which is the only such museum in the world, has its exhibition material collected from the area of Hungary.

The idea of creating gastronomy history museums can be traced back to the end of the 19th century.

In addition to the private collection of Frigyes Glück (1858-1931), who was an outstanding figure of the Hungarian hotel and catering trade, following WW1 a significant collection of catering industry equipment, menus, menu cards and photos have been retained by the Hotel and Catering Industry Association for a future museum.

It was founded in 1966, and started its operation in the World Heritage Buda Castle, in the building of the former Fortuna Inn, after which the street was also named, where it was in operation until 2005.

As of September, 2006, the museum opened its gates at a new location in District V, next to the Szent István Bazilika, in a building designed by Béla Lajta (formerly housing the Hungarian Foreign Trade Bank). Now it is placed at Óbuda, in the District III.

Initially the collection of the museum contained only catering-industry relics, which was later extended with a collection of trade history relics. The institution has the functions of an industry history museum, and meets the requirements of specialized-museology.

The catering history relics collection include furniture, equipment and tools from restaurants and confectioner’s shops.

Among the serving dishes and the eating and drinking utensils those with the emblem of a catering business (cafe house, confectioner’s shop, restaurant, etc.) are, from the aspect of trade history, of special value.

The largest group of the documentation collection is the collection of menus and menu cards. The document and archives collection, as well as the small prints collection have less pieces, but they are of the same value.

The historic collection of the museum is supplemented by a related fine art collection, numismatic and photo collection. The museum also has a specialized library.

The museum preserves the past and it serves the future, therefore it is also at the disposal of cultural institutions and of the sectors and schools of the profession. With its special tools it supports programs which reach out to a large number of people and also inspire tourism.

The many sided historical representation of the relationship between gastronomy, trade, tourism and culture is an important element of the scientific, educational and general educational activities.

It is a special responsibility of the museum to effectively take part in teaching and in further education, as well as to help in career orientation. It supports the broadening of professional knowledge by guided tours, unusual school classes, lectures, contests, etc.

In addition to the temporary exhibitions at Szent István square the museum also has chamber exhibitions at the Pilvax Restaurant, the Corinthia Grand Hotel Royal, the Gundel restaurant, the Erzsébet Hotel, the Budapest Business School, and at the Békéscsaba and Mezőtúr High Schools of Trade.