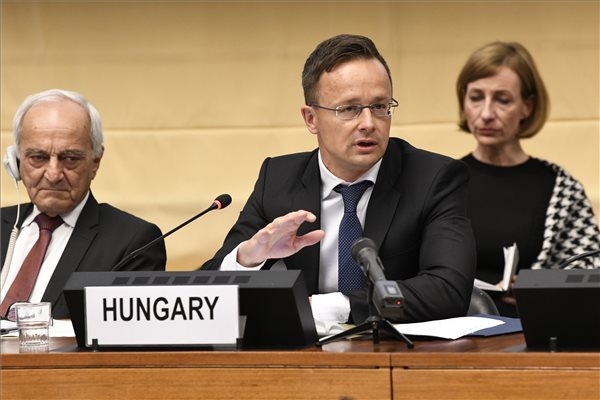 Foreign Minister Péter Szijjártó, in a letter to United Nations Special Rapporteur Fionnuala Ní Aoláin, has expressed “astonishment and shock” over her “defence of a terrorist”.

Szijjártó said it was “shocking” that the rapporteur had played the role of “defence lawyer for a terrorist who led an attack against Hungarian police who were protecting Hungary’s borders”.

Szijjártó wrote in response to a letter in which Ní Aoláin had said that Hungary had harmed the rights of Ahmed H, a Syrian national sentenced in Hungary on terrorism charges after a migrant riot at Hungary’s southern borders in 2015. She criticised both Hungary’s laws and the proceedings, saying the defendant was not a terrorist and his human rights had been violated.

In his response, Szijjártó asked whether it was “normal to cross the border shouting into a loudhailer, inciting an attack and throwing rocks at border police”.

He also asked if she “really means to launch a procedure against a country protecting its borders and the security of its citizens over the sentencing of a terrorist”.

“It is shameful that you spend members’ payments, including funds from Hungary’s taxpayers, to encourage terrorists to violate the borders of sovereign countries and to attack the police,” Szijjártó wrote.

Earlier in Bratislava, the minister accused the UN of encouraging “terrorism and migration”.

Speaking after a meeting of foreign ministers of the Visegrad Group and Turkey, Szijjártó noted that a UN commissioner for human rights planned to launch a procedure against Hungary in connection with a Syrian national sentenced in Hungary on terrorism charges.

Turkey, he added, had a crucial role in managing the pressure of migration

Answering a question about Turkey’s European integration, Szijjártó criticised “some countries” for being “hypocritical” and presenting different positions in public and when “being among themselves”.

He urged that the EU should build a strategic partnership with Turkey and stop “playing such an unfair game”.

Slovak Foreign Minister Miroslav Lajčák said that the talks focused on the Middle East with special regard to Syria, Iran, migration, and the Israeli-Palestinian situation.

He called Turkey an important partner in terms of security, and thanked Turkey for observing its agreement with the EU on migration.

Turkey’s EU accession is being blocked for political reasons, but the integration talks should not be dropped, he added. Answering a question about Turkey’s integration, Czech Foreign Minister Tomáš Petříček said that “the entry criteria must be met”.

Marcin Przydacz, Poland’s deputy state secretary for foreign affairs, said that issues in the Middle East or the Mediterranean “cannot be discussed without Turkey”.

Concerning Turkey’s EU integration, he said that “after Brexit we should demonstrate that apart from quitting, joining is possible, too”.

Mevlüt Çavușoǧlu, the Turkish foreign minister, said that “Turkey has wished to join the EU for over 60 years and it has never said anything else than that it is working to meet the criteria”.

He said he was aware that the entry process was blocked for political reasons but added that “if the EU does not want us, it has to make a decision”.