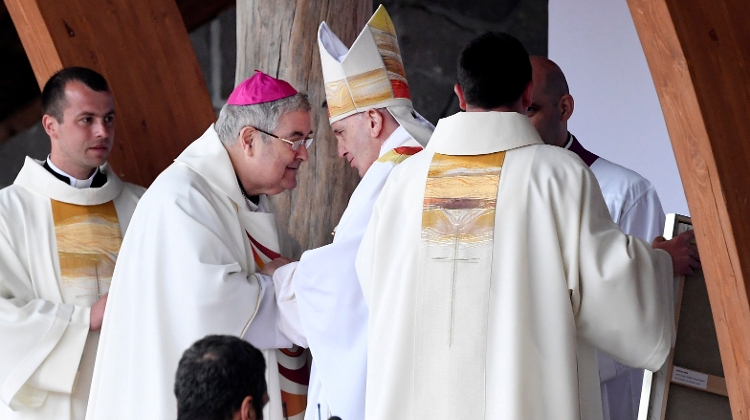 Commenting on the Pope’s visit to the most important shrine of Hungarian Catholics in Transylvania, left-wing outlets remark that during that historical event the Prime Minister was in Madrid watching Liverpool beat Tottenham in the Champions’ League final.

During his visit to Romania, Pope Francis celebrated a mass at the main pilgrimage site of Transylvanian Hungarians and told a reportedly 100 thousand strong crowd that old feuds among nations should be overcome.

Szeklers, the overwhelmingly Catholic Hungarians of northern Transylvania, interpret the Pope’s visit as a gesture of compensation for the discrimination they feel they have been subjected to over the past 100 years.

Hungary was represented by President János Áder and Deputy Prime Minister Zsolt Semjén, both of them Catholics. PM Orbán, a Calvinist Protestant, announced in advance that he would not attend the ceremony held in neighbouring Romania.

On 444, Sándor Czinkóczy writes ironically about the Prime Minister’s absence from the solemn event at Sumuleu Ciuc (Csíksomlyó, in Hungarian).

The head of the Hungarian government, he writes, who is a proud protector of Christianity at home and abroad, somehow felt it appropriate not to be part of the event.

Meanwhile, he adds, he took care not to miss another iconic event on the same day, namely the Champions League final. Czinkóczy’s remarks have been taken up by a series of left-wing and liberal outlets, including hvg and Magyar Narancsonline.

On Mandiner, Kristóf Trombitás is outraged by fellow right-wingers who have flooded social media sites with posts denigrating the Pope because of his calls to show humanity towards people fleeing from war and misery.

He himself also disagrees with the Pontiff on several issues, including the support Francis shows towards re-wed couples, he remarks.

Nevertheless, he understands that the Pope is moved by feelings of love, which are Jesus’s main legacy to all Christians.

He warns those who are only occasional churchgoers and know nothing about the faith not to treat the Pontiff with disrespect.