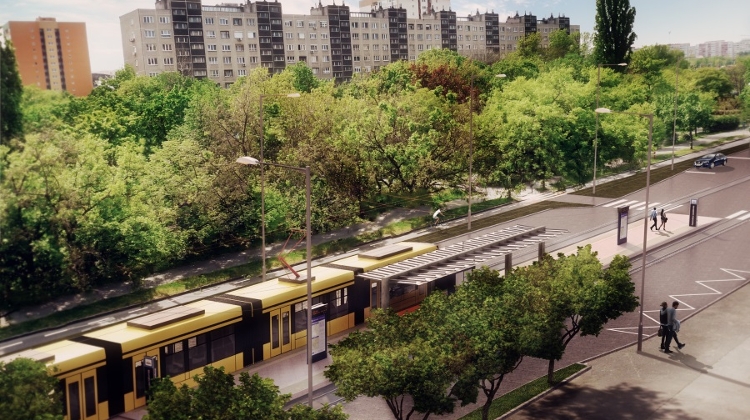 The extension of Budapest tram line 1 was presented to the public this week. The 1.7-kilometer extension makes the tram line the longest in the city (18.3 km), stretching from Kelenföld Railway Station, crossing the river into Pest and back, to Óbuda, news site magyarnemzet.hu reported.

With the terminus at Etele tér, the extension connects the no. 1 tram line with railways, long-distance buses, metro line M4, and trams nos. 19 and 49 of the Buda network.

The projectʼs cost amounted to approximately HUF 8.66 billion, with HUF 8 bln of funding coming from EU Cohesion Funds. In addition to the extension, the development features grass between the tracks, and additionally created green areas. Etele Park, for example, has been given new promenades and water features.

At the junction of Hengermalom út and Fehérvári út, a subterranean electric transformer was built to serve the new section of the tram line. In case of energy supply problems, it can also provide electricity for trams running along Fehérvári út, providing greater supply security in South Buda.

The report notes that new trams are expected to be delivered by the end of 2019 within the framework of the project. CAF is expected to deliver five new 56-meter, low-floor, air-conditioned trams.

The scheduled running time for the full length of the route is 47 minutes, according to timetables on bkk.hu.