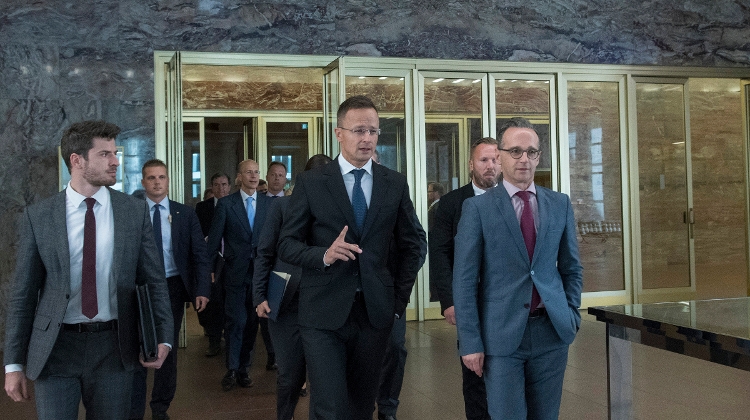 It would have been impossible to restore German unity without the help of Hungarians in 1989, Germany’s foreign minister said in Berlin at the opening of a Hungary-Germany youth forum.

Heiko Maas, referring to the opening up of the Hungarian border thirty years ago on September 10, 1989, said that Hungarians had cleared the path to freedom for escaping East Germans.

By opening the border, “Hungarians punched the first brick out of the Berlin wall”. This brick, he added, had become the foundation for today’s peaceful Europe based on solidarity.

The minister said that in the climate of today’s problems and disputes, “perhaps we should talk about this more from time to time”. He added that as a German and a European, he paid thanks to Hungarians for their steadfastness in 1989.

Hungarian Foreign Minister Péter Szijjártó said at the forum that cooperation between Germany and central Europe “fundamentally determines the future of Europe”.

The events thirty years ago showed that Hungarians and Germans working together is “good for the whole of Europe”, he said. Europe became stronger, wealthier and more peaceful with the accession of the eastern European states in 2004, and the region has gone on to be the engine of European growth, Szijjártó said.

The volume of trade of Germany with the Visegrad Group exceeds German-French trade by 74%, he said, adding that cooperation between eastern Europe and Germany is key to European competitiveness and therefore determines the bloc’s position in the world. He called for European Union enlargement to integrate countries of the Western Balkans.

Meanwhile, at a commemoration held at the plaque marking the 1989 events on the wall of the German lower house of Parliament, the Bundestag, Hungarian House Speaker László Kövér said Hungary’s independence and German unity were interlinked and constituted “a special ingredient of the future of a united, strong and democratic Europe”.

Kövér noted that a twin of the plaque is placed on the wall of the Hungarian Parliament, reminding lawmakers and visitors “what we Hungarians and Germans did, in a demonstration of our friendship, for unity, independence and democracy.”

Bundestag chairman Wolfgang Schäuble said at the event that the 1989 events were an example of Hungarian love of freedom. Hungarians “bravely and generously” gave a “crucial boost” to the events leading to German unity, he said.

“The time has come for Hungarian poets to seek new metaphors to describe the situation of their country, because Hungary is no longer a raft floating between East and West, but has a solid place in the heart of Europe, Schäuble said.

Hungary took a huge risk by opening the borders for some 200,000 East German refugees in 1989, Schäuble said, not only in view of the 80,000 Soviet soldiers occupying the country but also because the Soviet Union had clamped down on all previous freedom movements in the region, he said. Hungarians, however, chose to help East Germans, which resulted in a “shared sense of freedom”.

Germans have always thought of Hungary as a “neighbour without shared borders,” and the relationship reached a new level in 1989, he said.